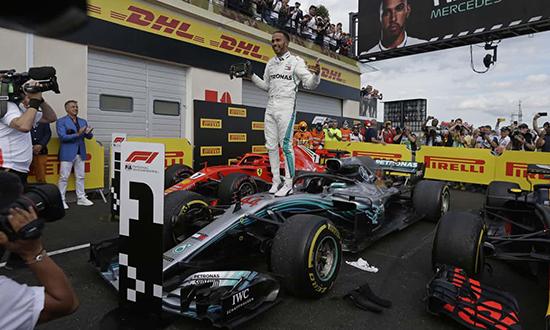 Lewis Hamilton won the French Grand Prix, the first the country has held for 10 years, with a controlled and dominant run from pole for Mercedes. But his championship rival Sebastian Vettel made an error on the opening lap that forced him almost to the back of the field and he could manage only fifth. The Red Bulls of Max Verstappen and Daniel Ricciardo came in second and fourth respectively with Ferrari’s Kimi Räikkönen securing the final podium place.

Hamilton had the race in his hands from the moment he avoided contact on the first lap at turn one that cost his teammate Valtteri Bottas, who finished seventh, and Vettel. While they were forced into fighting back, Hamilton made the most of his position. Having started at Paul Ricard a point behind in the title race, the result means he has retaken the lead and is now 14 points in front of Vettel.

The German’s comeback was impressive but fifth would have been as much as he might have expected, while Verstappen put in another solid performance to take his second podium in a row and his third in four races.

“Great work guys I am so happy for England,” said Hamilton. “It’s a beautiful Sunday.”

It is Hamilton’s first win at the French Grand Prix, having competed at Magny-Cours twice before in 2007 and 2008, the last time the race was held. His 65th career win will be hugely satisfying coming as it did, after the setback he received in losing his championship lead to Vettel, when the German’s win and Hamilton’s fifth place in Canada, gifted a 15-point swing in Vettel’s favour.

However in Canada they had not employed their new, upgraded engine, but in France they had and it proved to be formidable. Mercedes dominated practice and locked out the front row in qualifying.

The win is Hamilton’s third of the season, putting him equal with Vettel and, in taking the lead in the title race once more, it is the fourth time in eight races it has changed hands between the pair.

The championship remains finely balanced but Mercedes will be buoyed by the clear evidence that their new engine has matched and potentially bettered the progress Ferrari made with their new unit in Canada. In a title fight that is likely to be decided by tiny margins in a fierce development battle, every success will be celebrated.

Hamilton and the team will not be complacent but this is a hugely positive sign as they head in to the bulk of the European season, with back-to-back races at Austria and Silverstone next.

The race’s crucial moment came when a messy entry into turn one was hugely costly for Vettel, who made a quick start but locked up and clipped the rear of Bottas. The German dropped to 11th with a broken front wing and was forced to pit at the end of the lap, while the safety car was called out after further incidents in their wake.

Vettel took the soft tyres and emerged in 17th, his race already reduced to damage limitation. Bottas had a left rear puncture and also pitted for the soft tyres, with the pair now at the back off the field. Vettel was investigated for causing a collision and given a five-second time penalty by the stewards.

Crucially, however, Hamilton escaped it all at the front and made it through in front of Verstappen who was up to second by taking avoiding action across the run off, for which he was not penalised.

Vettel charged on the restart on lap six and moved swiftly through the pack, making it to 12th by the end of lap seven. He was into the points in 10th, passing Nico Hülkenberg on lap 12 but was already 24 seconds back from Hamilton. The British driver however was able to consistently pull away from the chasing Verstappen and Ricciardo.

Vettel’s run continued and he took fifth place from Carlos Sainz on lap 20 heading towards the chicane on the Mistral straight. The Red Bull’s pitted on laps 26 and 28 and Vettel took fourth from the Australian though the stops. Mercedes kept Hamilton out until lap 33 when he stopped for the soft tyres, emerging behind Räikkönen who had yet to pit.

Vettel lost fourth to Ricciardo on much fresher tyres through Le Beausset on lap 35 but out front, after the stops had shaken out, Hamilton was still leading, five seconds clear of Verstappen and still 15 to the good on Vettel, who was struggling on worn tyres which had taken a pounding as he came through the field.

Ferrari had no option but to pit the German once more on lap 40, taking the ultrasofts and his penalty, emerging still in fifth but he could do no more. Räikkönen on softer, fresher tyres passed Ricciardo for third on lap 48 but too could not make any further impression. Hamilton had not been troubled at the front of the race, he maintained the gap to Verstappen sealing a clinical finish.

Kevin Magnussen in the Haas was sixth; the Renault’s of Sainz and Hülkenberg in eighth and ninth and Sauber’s Charles Leclerc once again driving superbly to take 10th.