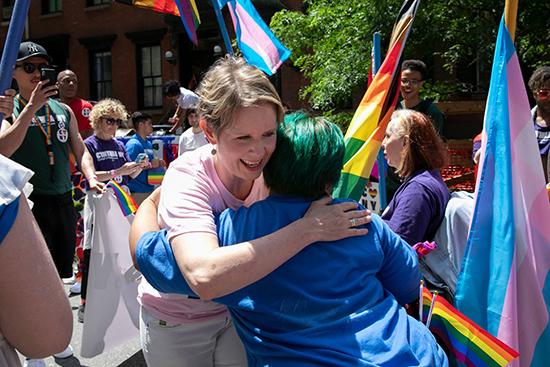 The governor brought a hulking tractor-trailer with confetti guns, thousands upon thousands of rainbow-printed signs and a coterie of elected officials. His Democratic challenger brought a modest pickup truck with glittery blue tassels, a small but vigorous musical quartet and Lea DeLaria, an actress from the television show “Orange Is the New Black.”

He was deliberate and orderly, marching behind a banner emblazoned with his name — “Governor Andrew M. Cuomo” — and the words “New York State of Love,” pausing every few blocks for photographers while a member of his contingent pronounced his achievements through a loudspeaker. She zigzagged across the street, now on one side, now the other, her face flushed and sweaty as her wife tried to tug her away from revelers screaming her name — “Cynthia Nixon!” — or just “That’s the lady from ‘Sex and the City.’”

As Mr. Cuomo and Ms. Nixon, rivals in September’s Democratic primary for governor, marched on Sunday along the rainbow-bedecked route of New York City’s Pride March, their contingents soon appeared to take on the characters of their campaigns: his marked by his established title and accomplishments; hers fueled by her grass-roots activism but also, in no small part, by her celebrity.

Both bring formidable résumés to voters in the lesbian, gay, bisexual and transgender community this fall. Mr. Cuomo successfully pushed to legalize same-sex marriage in 2011 and expanded housing and nutritional support for H.I.V. positive New Yorkers. Ms. Nixon, a longtime activist for L.G.B.T.Q. rights, would be the state’s first female and openly gay governor.

But Ms. Nixon faces a steep climb against Mr. Cuomo (recent polls show the governor with a 35-point lead), a fact that appeared to be printed on the streets of Greenwich Village, where every block was packed with dozens of spectators brandishing signs declaring “NY Stands With the LGBTQ+ Community,” and in bigger letters, “Cuomo.” The governor marched at the front of the parade, accompanied by elected officials including Lt. Gov. Kathy Hochul, Representative Sean Patrick Maloney and Letitia James, the New York City public advocate.

“Let’s hear it for our champion,” the governor’s aide shouted at one point.

Ms. Nixon marched more than a dozen blocks behind, with a fraction of Mr. Cuomo’s retinue, no speaker system and supporters whose chants were sometimes drowned out by the noise from the crowd.

To be sure, the noise often came from cheering onlookers, hands outstretched, who were clamoring to take selfies with Ms. Nixon. Mr. Cuomo attracted waves and photographs — “It’s the governor!” — but Ms. Nixon generated the kinds of screams reserved only for entertainers.

It was unclear, though, if they recognized her for her screen credits or her fledgling political career: Several of the people who successfully scored a photograph with her said they had not been following the New York governor’s race. One woman, after beckoning Ms. Nixon over for a kiss on the cheek, quickly dismissed questions about politics. “No, I’m from Australia,” she said.

But that detachment was not unique to Ms. Nixon: Of 12 people waving Mr. Cuomo’s signs, eight said they were not from New York. Three said they were from the state but had not followed the race, and only one said she had been tracking the contest, but declined to say who she was supporting.

For all the political messaging — Mr. Cuomo’s signs said “Paid for by Andrew Cuomo 2018,” and Ms. Nixon’s supporters periodically shouted anti-Cuomo chants — the vast majority of people seemed all but oblivious to the political undertones of the candidates’ presence. A few people snapped photos with Ms. Nixon while holding Mr. Cuomo’s signs; a few members of Ms. Nixon’s group, seemingly unaware, hoisted the signs themselves.

Still, the parade made starkly evident the sheer financial, operational and messaging advantage of Mr. Cuomo’s campaign, which in January had more than $30 million on hand. (Ms. Nixon has just over $400,000.) Before joining the parade, Mr. Cuomo unveiled a new monument along the Hudson River honoring the victims of the Pulse nightclub shooting in Orlando in 2016, a project he had commissioned by executive order. That was followed by a breakfast at a nearby hotel, where Mr. Cuomo was endorsed by Corey Johnson, the City Council speaker and the state’s first openly H.I.V. positive official, and where the governor announced that he would prohibit health care and health insurance providers from discriminating against transgender patients.

His perch as an incumbent, and its accompanying power to issue orders and shape policy, weighed heavily in many of the decisions by the governor’s supporters to march with him.

“The difference between the governor and Cynthia Nixon is that he has experience,” said Pat Martin, 66, who marched for Mr. Cuomo with her wife, Paulette Martin. “His track record is proven. Her ideology is great, but in order to make what she wants to do work, you have to know the ins and outs of politics.”

“It wasn’t an easy decision,” said Meredith R. Miller, a former president of the LGBT Bar Association of Greater New York, who also marched with the governor. “If she were governor, I wouldn’t be upset. But Governor Cuomo has done a lot for us.”

Ms. Nixon’s supporters said it was her outsider status, along with the pioneering nature of her candidacy, that made her appealing.

“I would love to see a woman who gets to be in office in New York State,” said Pilar Arthur-Snead, 46, who had traveled from Albany to attend the parade. “I’d love to see somebody who’s not part of the party establishment.”

But the overarching message from the throngs in Greenwich Village was that politics could wait for another time.

Hong Yang, who had traveled to the parade with her fiancé, Rich, from their home in Orange County, shouted her support for Ms. Nixon as she approached Ms. Yang’s spot behind the barricades just east of the Stonewall Inn. Ms. Yang started to explain the reasons for her support — and then, abruptly, cut herself off as Ms. Nixon got closer.

“I want to take a picture, I’m sorry,” she explained quickly, before turning her attention back to the party on the street.

An earlier version of this article misstated the amount of money Cynthia Nixon’s campaign had on hand. It was just over $400,000, not $1 million.