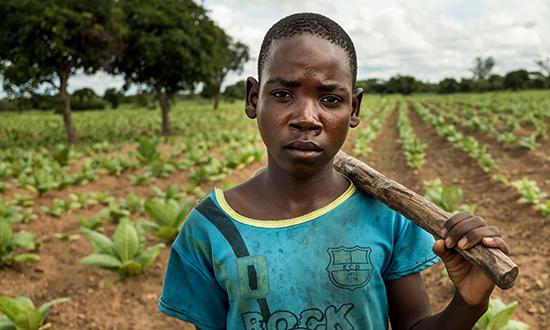 A 14-year-old boy at work on a tobacco plot in Kasungu district, Malawi. Photograph: David Levene for the Guardian

Child labour in tobacco is rampant and on the increase in poorer countries, a major Guardian investigation can reveal, in spite of claims by multibillion-dollar companies that they are tackling the issue.

Evidence from three continents shows how children aged 14 and under are kept out of school and employed in hard and sometimes harmful physical labour to produce the tobacco leaf that fills cigarettes sold internationally, including in the UK, US and mainland Europe.

Families are trapped in generational poverty while salaries at the top of the industry run to millions of dollars a year. The companies say they monitor child labour and remove children from the fields to go to school, but experts have told the Guardian that the numbers are going up, not down, as tobacco growing increases in Africa and Asia.

How hazardous are tobacco farming conditions?

The consequences for children are lifelong. “I wanted to be a nurse,” said one 14-year-old girl in Malawi, who spends her days weeding under a hot sun with a heavy hoe.

Families see no option but to use their children in the fields as unpaid labour. Many are in debt to landowners and landlords and have to stay on from one season to the next, unable to break the cycle of deprivation.

“No effective actions have been taken to reverse this scenario,” said Vera Da Costa e Silva, head of the secretariat of the World Health Organization’s Framework Convention on Tobacco Control, a key body tackling an industry that kills more than 7 million people a year. “What happens is that tobacco farming gives its profits to the industry but gives very low incomes to the tobacco growers themselves.”

The tobacco firms say they are doing everything they can to end exploitative child labour.

But it is a scandal for which the multinational companies have a direct responsibility, she said. “There is a double burden – the burden of child labour itself and the burden of working on a deadly product that ultimately affects the children themselves.”

Silva said about 1.3 million children a year were working in tobacco fields in 2011 and, according to the UN’s International Labour Organization (ILO), the numbers are rising with a shift in tobacco growing from some of the better-off countries to some of the poorer. It declined between 2000 and 2013 in Turkey, Brazil and the United States, said the report to the organisation’s governing body in February 2017, but increased in others, such as Argentina, India and Zimbabwe.

Given that child labour in agriculture occurs more often in low-income countries, the ILO report said, “this shift in production may have resulted in increased child labour and other decent work deficits in tobacco production. Although there are no estimates of the number of child labourers in tobacco globally, surveys indicate that in impoverished tobacco growing communities, child labour is rampant.”

The US Department of Labor lists 16 countries where children are suspected to work in tobacco. Human rights organisations including Human Rights Watch have documented child labor in the tobacco fields in Bangladesh, Kazakhstan, Indonesia, Brazil and most recently Zimbabwe.

BAT and JTI tobacco firms say light work in the fields that does not affect health or education is acceptable for 13-15 year olds. Campaigners say they should not be anywhere near tobacco before they are 18.

The average income of a tenant farmer in Kasunga, one of the biggest tobacco-growing areas of Malawi, for 10 months of work was 223,710 kwacha (roughly $380 or £286 at current rates) according to a study in 2017 by the Centre for Social Concern, a Malawian NGO.

Tobacco industry: in what countries is there evidence of child labor?

Each kilo of tobacco is estimated to provide enough for 1,200 cigarettes; tenant farmers in Kasungu last year earned 200 kawacha (30 cents or 23p) per kilo when the crop was sold.

Tenant farmers are at the bottom of the tobacco food chain. They agree to work for a year for a contract farmer who has land, which he may own or have leased. That farmer’s contract is with one of the big leaf-buying companies – Alliance One, Universal (in Malawi known as Limbe Leaf) or Japan Tobacco International (JTI). The leaf-buying companies agree to purchase tobacco from their contract farmers and supply seed, fertiliser, pesticide and tools. The leaf buyers say they tell them not to employ children. Alliance One said the elimination of child labour is a “top priority”; Universal said it is committed to fighting child labour.

The tobacco giants have their own corporate social responsibility schemes. They say they monitor child labour and build wells or schools. But Professor Marty Otanez, of the University of Colorado in Denver, an anthropologist who has studied tobacco farming in Malawi for many years, said the welfare projects were “pushing out goodwill on behalf of tobacco companies to address some of the problems but avoid the harder issues of leaf prices and living and earnings”.

All of the four major companies say they are doing what they can. “BAT takes the issue of child labour extremely seriously and agrees that children must never be exploited, exposed to danger or denied an education,” said a spokesperson. “We do not employ children in any of our operations worldwide and make it clear to all of our contracted farmers and suppliers that exploitative child labour will not be tolerated.” Imperial Tobacco said: “Child labour is unacceptable and we make every effort to stop it happening in our supply chain.”

PMI called child labour an unacceptable reality. “We are committed to eliminating child labor and other labor abuses wherever we source tobacco,” said Miguel Coleta, the company’s sustainability officer. “We have been working to tackle the root causes of child labor head-on and have achieved a global reduction of child labor incidents on contracted farms over time. We welcome continued systematic scrutiny of our efforts and recognize we cannot succeed alone. This requires serious and lasting efforts by all stakeholders, including government and civil society.”

JTI also said child labour was endemic to agriculture but had been decreasing in areas where it directly contracted farmers. “The reality is that child labor stems from a combination of social, economic and regulatory causes. At JTI, we don’t pretend to be able to solve the problem of child labor on our own, but we are doing our utmost to play our part in solving the problem, working with others,” the company said.