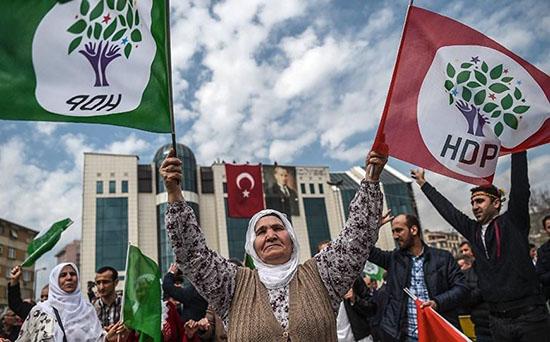 The Kurdish-issue focused Peoples’ Democratic Party (HDP) managed to get more than 10 percent of the votes in Turkey’s June 24 elections, passing the national election threshold.

The HDP may take more than 60 seats in parliament, according to the unofficial preliminary results announced by the state-run Anadolu Agency on June 24.

The party has dominated the polls in southeastern provinces, winning more than 65 percent of the votes in its strongholds Diyarbakır, Şırnak and Hakkari. In Mardin, Batman and Ağrı, its vote rate passed 55 percent.

It also generated over 10 percent support in Istanbul, the Aegean province of İzmir, and the southern provinces of Mersin, Adana and Hatay.

In the June 7, 2015 elections the HDP got 80 seats in parliament in a landmark election victory, disabling the ruling Justice and Development Party (AKP) from forming a majority in parliament. But it lost 21 of them in the snap elections on Nov. 1, 2015.

The number of seats in parliament increased to 600 from 550 in the April 2017 referendum that replaced the parliamentary system with an executive presidential model.

President Recep Tayyip Erdoğan has consistently labeled the HDP an affiliate of the outlawed Kurdistan Workers’ Party (PKK), which is listed as a terrorist organization by Turkey, the European Union and the United States. The HDP denies any links to the PKK.

A leaked video, recorded during a meeting on June 9 of the AKP’s neighborhood heads, showed Erdoğan instructing his party’s local organizations to put “tight marking” on voters in order to bring the HDP below the 10 percent threshold.

“Friends, our party organization must conduct very different work on the HDP. I can’t speak these words outside [publicly]. I am speaking them with you here. Why? Because if the HDPfalls below the election threshold it would mean that we would be in a much better place,” Erdoğan was heard saying in the video.

Nine HDP deputies are currently jailed over terror charges, with some having lost their seats in parliament. HDP’s former leader Selahattin Demirtaş ran for president from prison, where he has been held for over a year-and-a-half.

HDP supporters are celebrating passing the electoral threshold in several cities, including Diyarbakır.