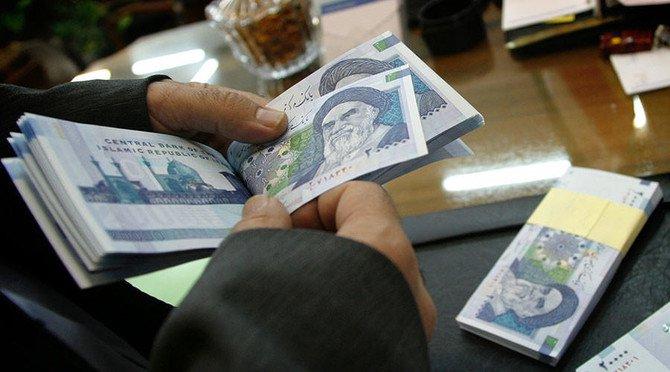 DUBAI: The Iranian rial plunged to a record low against the US dollar on the unofficial market on Sunday, continuing its slide amid fears of returning US sanctions after President Donald Trump in May withdrew from a deal on Tehran’s nuclear program.
The dollar was being offered for as much as 87,000 rials, compared to around 75,500 on Thursday, the last trading day before Iran’s weekend, according to foreign exchange website Bonbast.com, which tracks the unofficial market.
Iran’s semi-official news agency ISNA said the dollar had climbed to 87,000 rials on Sunday from about 74,000 before the weekend on the black market, and several Iranian websites carried similar reports.
The currency has been sliding for months because of a weak economy, financial difficulties at local banks and heavy demand for dollars among Iranians who fear the pullout by Washington from the nuclear deal and renewed US sanctions against Tehran could shrink the country’s exports of oil and other goods.
The fall of the national currency has provoked a public outcry over the quick rise of prices of imported consumer goods.
Merchants at the mobile phone shopping centers Aladdin and Charsou in central Tehran protested against the rapid depreciation of the rial by shutting down their shops on Sunday, the semi-official news agency Fars reported.
A video posted on social media showed protesters marching and chanting “strike, strike!” The footage could not be authenticated independently by Reuters.
Hours later, Information and Communications Technology Minister Mohammad Javad Azari-Jahromi said on Twitter that he visited the protesting merchants.
“I will try to help provide hard currency for (mobile) equipment (imports),” Azari-Jahromi wrote, adding: “The merchants’ activity has now gone back to normal.”
Some of the US sanctions against Iran take effect after a 90-day “wind-down” period ending on Aug. 6, and the rest, most notably on the petroleum sector, after a 180-day “wind-down” period ending on Nov. 4.
The rial has weakened from around 65,000 rials just before Trump’s announcement of the US withdrawal in early May, and from 42,890 at the end of last year — a freefall that threatens to boost inflation, hurt living standards and reduce the ability of Iranians to travel abroad.
In an effort to halt the slide, Iranian authorities announced in April they were unifying the dollar’s official and black market exchange rates at a single level of 42,000, and banning any trade at other rates under the threat of arrest.
But this step has failed to stamp out the unofficial market because authorities have been supplying much less hard currency through official channels than consumers are demanding. Free market trade simply went underground, dealers said.