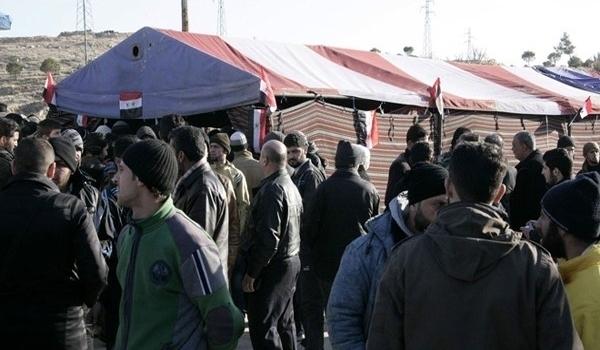 The Russian Reconciliation Center for Syria reported that the FSA militants joined the Syrian Army troops in ten townships and small towns in Dara’a province.

In the meantime, local sources reported that the army men managed to advance and take control over a main part of the town of Busra al-Harir in Eastern Dara’a.

The sources further said that a large number of terrorists have been killed and their military hardware has been seized in Busra al-Harir, adding that the town has fallen to the army in military terms.

They went on to say that tens of militants have laid down arms and applied for joining the Damascus army.

The sources said earlier today that the army has sent a large convoy of forces and equipment to the small town of Deir al-Bakht in Northwestern Dara’a, adding that the convoy included 140 military vehicles carrying a large number of elite troops.

The sources said that the army convoy arrived in the Death Triangle Region among Damascus, Dara’a and Quneitra provinces.

The sources further said that the army’s artillery and missile units pounded terrorists’ positions in the town of Basr al-Hariri, adding that the government forces are planning to drive a wedge between Northeastern Dara’a and other militant-held regions in the province.

In the meantime, local sources said that other units of the army intend to launch fresh attacks and advance in militant-held regions in al-Qariyeh Sharqi and al-Qariyeh Qarbi.