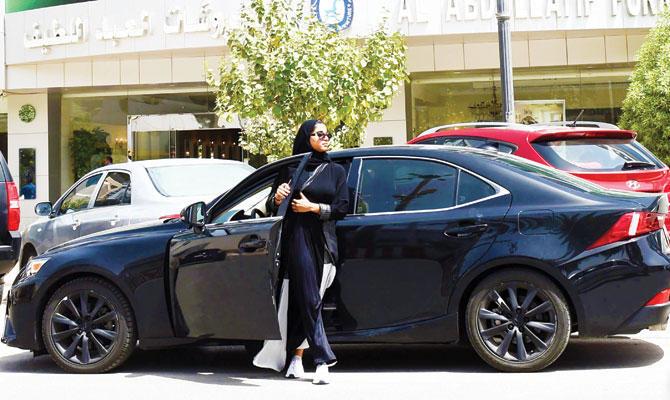 LONDON: Saudi insurance stocks surged on Sunday, with investors expecting the sector to reap significant dividends following the lifting of the ban on female drivers.
Insurance stocks — one of the worst performing sectors on the Saudi bourse for the year to date — outperformed other classifications on Sunday, ending 2.4 percent higher, compared with a 1.8 percent rise for the Kingdom’s headline index.
Amana Insurance and AlRajhi Takaful were the best performers of the day, gaining 9.9 percent each. Tawuniya, the Kingdom’s largest insurer, ended Sunday 1.1 percent higher, with only one of the country’s 33 listed insurance providers closing lower for the day.
The lifting of restrictions on female drivers — which came into effect on Sunday after first being announced in September — is part of a series of wide-ranging reforms introduced as part of Saudi Arabia’s Vision 2030 economic transformation program, designed to diversify the economy away from a reliance on oil revenues.
The advent of women drivers is forecast to benefit the economy by significantly increase female participation in the workforce, and stimulating financial, insurance and retail sectors among others.
The insurance sector is set to draw particular benefit from the move, but may remain under pressure, according to rating agency S&P.
“We anticipate that efforts of the local authorities to tackle the large number of uninsured drivers, combined with the arrival of women drivers … and the introduction of additional benefits under the unified medical policy from July 1, will support further premium growth in the industry in the medium term,” said S&P in a research note in April.
“However, these factors may be offset by the large number of foreign workers that have already left or will be leaving the Kingdom in 2018.”
In spite of yesterday’s price surge, insurance stocks are 8.4 percent lower for the year to date. Tadawul as a whole is up 15.6 percent so far this year, making the bourse one of the world’s best performers for 2018.
Investor sentiment on Sunday was also boosted by investor optimism after index provider MSCI announced last week that it would upgrade Saudi stocks to its Emerging Markets Index from next year.
The widely anticipated upgrade — which puts Saudi equities on an index tracked by around $2 trillion worth of global assets — is expected to attract up to $40 billion of international funds, Tadawul CEO Khalid Al-Hussan told Arab News last week.
MSCI’s upgrade came after a similar move by fellow index provider FTSE Russell in February, which is also scheduled to come into effect from next year.
Banks were among the other bright performers on Tadawul on Sunday. Arab National Bank led gains, closing up 4.2 percent, while blue-chip names NCB and AlRajhi rose 1.6 percent and 2.3 percent respectively.
Some petrochemical companies also added value, Reuters reported, following a rise in oil prices after OPEC decided on only modest increases in crude production last week.
Outside Saudi Arabia, Gulf markets posted minor gains. In Dubai, where the index was flat, Air Arabia was unchanged. Shares in the airline have declined by more than 10 percent since early last week, when the company said it had hired experts to protect its business interests in private equity firm Abraaj, which has filed for provisional liquidation. The airline said its exposure was around $336 million.
Last week, the UAE’s securities regulator asked listed companies to declare their exposure to Abraaj.