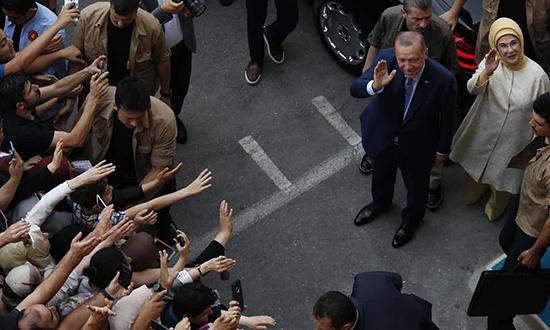 Yaşar Ayhan used to be Recep Tayyip Erdoğan’s barber when the Turkish president was still mayor of Istanbul. A photograph of them together still hangs in Ayhan’s shop in the Kasimpaşa district where Erdoğan grew up.

Ayhan, 52, last saw the president at a breakfast during Ramadan. His hair was thinner, he said, burdened as he is by Turkey’s myriad challenges. “I voted for Tayyip Erdoğan,” he said. “We are proud of him. He’s not only a leader, but a world leader.”

Turkish citizens cast their ballots on Sunday in the most important elections in a generation. They voted in presidential and parliamentary polls that could shape Turkish politics for years to come.

Erdoğan’s opponents said they voted for opposition parties because they sought an end to one-man rule and wanted a more representative democracy. The winner of the presidential race will assume sweeping new powers narrowly approved in a referendum last year.

His supporters and the ruling AKP party said they backed the president because they trusted him to lead Turkey through turbulent economic times, given the country’s growth over his 16 years in power and his positioning of the country on the world stage. They also point to his championing of Muslim causes.

“He delivers on what he says, and is trustworthy and just,” said Ayhan. “He is gentle but tough on Turkey’s enemies.”

Recep, 37, said he also voted for Erdoğan in the presidential election because the Turkish leader hailed from the same district as he did, but he cast his ballot in the parliamentary elections for the Islamist Saadet party, which has campaigned strongly on fixing the economy.

“I believe AKP parliamentarians aren’t efficient because of corruption,” he said.

When Erdoğan called for early elections, many observers believed he did it to preempt an economic slump in the coming months. Mismanagement of the economy, worries of overheating, a growing foreign trade deficit and a rapid fall in value of the Turkish lira were the backdrop to the election campaign.

In the liberal neighbourhood of Cihangir, voters said they had turned out to cast their vote against what they described as one-man rule. They said they were happy to take part in a democratic tradition in what may be the most important election in their lifetime.

Fulya, a 39-year-old who has breathing difficulties, cast her ballot while her friend carried her oxygen tank. She said she was against the extraordinary powers that Erdoğan will wield if he wins.

“We want the parliamentary system back, we are against one-man rule and everyone has to be represented,” she said. “I especially wanted to vote in this election because a candidate is in prison as a political hostage.”

Her friend Hakan, 45, said he was voting “against tyranny”.

“For almost 10 years I was not optimistic,” he said. “This is the first time.”

The most popular opposition candidate, Muharrem İnce, has inspired voters with a dynamic campaign that has drawn crowds of hundreds of thousands in Ankara, Izmir and Istanbul. More than a million attended a rally by the affable former physics teacher in the capital on Saturday.

Resit, 93, visited the polling station with his daughter holding his arm to vote for İnce. “It is our duty to vote,” they said.