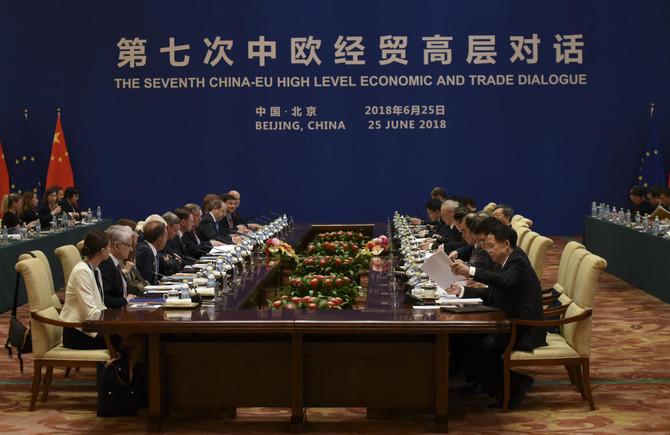 BEIJING: China and the European Union agreed Monday to launch a group that will work to update global trade rules to address technology policy, subsidies and other emerging irritants and preserve support for international trade amid US threats of import controls.
Actions such as US President Donald Trump’s unilateral tariff hikes in a technology dispute with Beijing show World Trade Organization rules need to keep pace with changes in business, said an EU vice president, Jyrki Katainen.
Katainen said Europe was not siding with Beijing in its dispute with Trump but was taking action to protect the global system of regulating free trade. He said the EU wants other governments to join the WTO group.
Companies worry the US-Chinese dispute could chill global trade and economic growth if other governments respond by raising their own import barriers. Even before Trump took office, economists were warning countries were tightening import restrictions and taking steps to favor their companies over foreign rivals.
US officials complain the WTO, the Geneva-based arbiter of trade rules, requires an overhaul because it is bureaucratic, rigid and slow to adapt to changing business conditions.
Katainen said Europe wants to focus on issues including subsidies to industry, government pressure on foreign companies to hand over technology and the status of state-owned industry — all areas in which Beijing faces complaints by Trump as well as other trading partners.
“I don’t expect these negotiations to be easy,” Katainen said at a news conference. But if nothing is done, “the environment for multilateral trade will vanish.”
Trump has threatened to impose tariffs of 10 percent to 25 percent on up to $450 billion of Chinese goods. Beijing responded to Washington’s first round of hikes on $34 billion of imports by raising duties on US soybeans, whiskey and other products.
Other governments have similar complaints but Trump has been more direct about challenging Beijing and threatening to disrupt exports.
Beijing might agree to talks to deflect further sanctions but is unlikely to agree to changes that hamper its technology plans, said Mark Williams of Capital Economics.
“I very much doubt they would agree to anything that would have teeth and punish them,” said Williams. Policies companies object to are “integral to the growth model China is pursuing,” he said.
Beijing agreed to narrow its multibillion-dollar trade surplus with the United States by purchasing more American goods but scrapped that after Trump went ahead two weeks ago with a tariff hike on $34 billion of imports.
Beijing also has cut import duties on autos and some consumer goods and promised to remove limits on foreign ownership in its auto, insurance and finance industries.
But the Communist government has resisted any change to its plans that call for challenging US and European technology dominance by creating Chinese companies capable of competing in fields including clean energy, biotech and aerospace.
Chinese officials deny foreign companies are required to give up technology. But in many industries they are compelled to work through state-owned partners, which requires them to share know-how with potential competitors.
One in five companies that responded to a survey by the European Union Chamber of Commerce in China released last week said they felt compelled to hand over technology in exchange for market access.
Trump infuriated US allies — from the EU to Canada and Mexico — last month by imposing tariffs of 25 percent on imported steel and 10 percent on aluminum. He said imports threatened America’s national security — a justification countries use rarely because it can be easily abused.
Beijing has tried to recruit European allies in its dispute with Washington, promising visiting leaders including Germany’s Chancellor Angela Merkel in May to open industries wider to their companies.
On Monday, Premier Li Keqiang, China’s No. 2 leader, told visiting French Premier Edouard Philippe that Beijing would allow more imports of beef and other food from France. Li said French companies were welcome to invest.
“China takes a positive attitude to cooperation with the French side,” Li said.