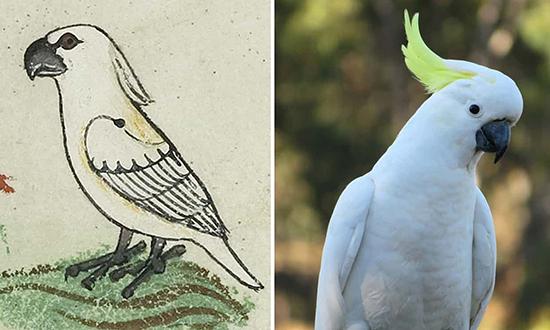 On the margins of a 13th-century manuscript written by Holy Roman Emperor Frederick II, are more than 900 illustrations of birds and falconers. Among the usual hawks, herons, and sparrows familiar to European readers are four sketches of a bird from further afield – an Australasian cockatoo.

The images are believed to be the oldest European depiction of the bird, trumping a similar discovery in a 15th-century artwork, and have sparked a reassessment of trading routes that existed more than 700 years ago.

They are likely to be of a single bird, a cockatoo given to Frederick II, who was known for his large menagerie of animals, including lions, panthers and elephants. It was presented to him by al-Kamil, the sultan of Egypt, meaning the bird was probably traded first from Australasia to Egypt before it was brought to Europe.

The images are believed to pre-date Andrea Mantegna’s 1496 altarpiece Madonna della Vittoria, which was previously believed to be the oldest European depiction.

Dr Heather Dalton, a historian at the University of Melbourne, published research about the cockatoo in the Mantegna artwork in 2014 and, after news coverage of the discovery, was contacted by Finnish biologists who said they had seen images of a cockatoo in Frederick II’s manuscript, which pre-dates the altarpiece by 250 years.

“I was just thrilled to bits of course,” said Dalton, who collaborated with the Finnish researchers for an article published in Parergon Journal. “I just couldn’t believe that nobody had really talked about them, this is a high-profile document.”

“The main significance about it is we tend to think of our region, not just Australia, but the islands around it, as the very last things to be discovered; the European view is it’s almost this dead continent and nothing was happening until Europeans discovered it.

“The fact that a cockatoo either from the northern tip of Australia, or from New Guinea or the islands around it, was traded to Cairo and on to Sicily is significant. It’s a window in on what I think was quite a vibrant trading network.”

By examining the manuscript, Dalton and her collaborators, were able to conclude the images are of a female cockatoo, because red paint was used for the eyes and females have red or reddish-brown eyes, whereas male cockatoos have black eyes.

The researchers also noted that the crest of the cockatoo was not raised – something the birds do when aggressive, fearful, surprised or as part of a courtship display – and concluded this probably meant Frederick’s bird “felt safe and calm” while being sketched.

Dalton said that since publication of her discovery of the cockatoo in the Mantegna work in 2014, colleagues had been sending her joke emails with various Australian animals Photoshopped onto famous artworks; a joke that might resurface in light of this new cockatoo discovery.

“I’m looking for the wombat in the altarpiece now,” she said.