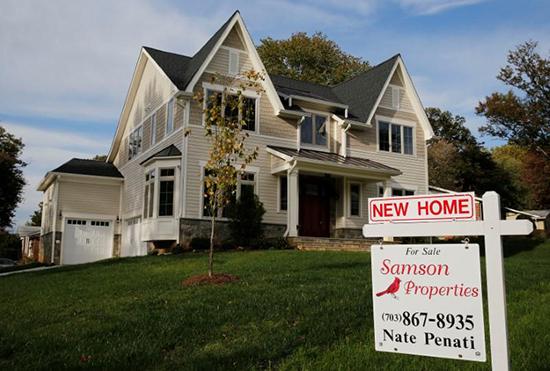 WASHINGTON (Reuters) – Sales of new U.S. single-family homes increased more than expected in May as transactions in the South surged to near an 11-year high and dampened prices, but the overall housing market remained constrained by a dearth of properties for sale.

The housing shortage has been worsened by rising material costs as well as a lack of land and skilled labor. Housing is lagging other sectors of the economy and is not expected to contribute to economic growth in the second quarter.

“The upward trend in the new home sales data contrasts with the signals from many other recent housing indicators, which have turned weaker lately,” said Daniel Silver, an economist at JPMorgan in New York. “We still think that real residential investment will be close to flat in second quarter.”

Economists polled by Reuters had forecast new home sales, which make up 11 percent of housing market sales, rising only 0.7 percent to a pace of 667,000 units in May.

Sales in the South, which accounts for the bulk of transactions, rebounded 17.9 percent to a rate of 409,000 units in May, the highest level since July 2007. The increase ended two straight months of declines.

New home sales are drawn from permits and tend to be volatile on a month-to-month basis. They increased 14.1 percent from a year ago. New home sales are getting a boost from an inventory crunch in the market for previously owned houses.

A report last week showed existing home sales falling for a second straight month in May.

Supply has trailed strong demand for housing, which is being driven by a robust labor market, leading to a sharp increase in home prices. Economists say high mortgage rates so far do not appear to be diminishing demand.

The 30-year fixed mortgage rate averaged 4.57 percent last week and has risen more than 50 basis points this year. Further increases are likely after the Federal Reserve raised interest rates earlier this month for a second time this year and forecast two more rate hikes by the end of the year.

The dollar .DXY slipped against a basket of currencies while prices of U.S. Treasuries rose.

The median new house price fell 3.3 percent to $313,000 in May from a year ago. That was the lowest price in a year and the result of sales being concentrated in the South. House prices are generally lower in that region.

“At current levels and controlling for population growth, we’re building roughly 2.7 homes for every 1,000 Americans – well below historic averages from the 1980s and 1990s of about 4.2 homes per 1,000 residents,” said Aaron Terrazas, senior economist at Zillow in Seattle.

Builders are struggling with higher lumber prices as well as labor and land shortages. A survey last week showed confidence among single-family homebuilders dipped in June, with builders “increasingly concerned that tariffs placed on Canadian lumber and other imported products are hurting housing affordability.”

At May’s sales pace it would take 5.2 months to clear the supply of houses on the market, down from 5.5 months in April. Nearly two-thirds of the houses sold last month were either under construction or yet to be built.