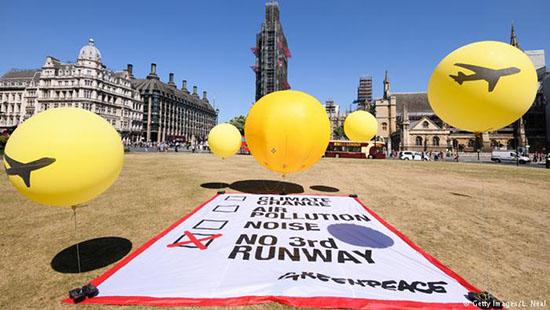 After decades of controversy, British lawmakers voted to build a third runway at London’s Heathrow Airport. The London mayor, local councils and activist groups said they will be launching legal action against the plans.

The British parliament on Monday night voted in favor of controversial plans to build a third runway at London’s Heathrow airport.

The vote comes following decades of controversy over pollution, noise concerns and the fact that hundreds of homes will be knocked down to accommodate the runway.

Protesters staged a “lie-in” in parliament ahead of the vote that saw some Conservative Party lawmakers voting against their own government.

Prime Minister Theresa May had directed Conservative Party lawmakers to vote in favor of the project.

“[May] believes it sends out an important message about global Britain and making the most of the opportunities which lie ahead of us,” May’s spokesman told reporters.

Foreign Secretary Boris Johnson, whose constituency is one of those most affected by the plans, has staunchly opposed the runway. But he managed to miss the vote due to a trip to Afghanistan, allowing him to avoid either supporting the government or breaking his word to voters.

“The Government is pressing ahead with the wrong option, resulting in intolerable noise levels and worsening air quality,” Khan said on Twitter.

Greenpeace UK said it would launch a joint legal challenge to the plans with a cross-party group of London councils and London Mayor Sadiq Khan.

“If ministers don’t want to uphold the laws protecting us from toxic fumes and climate change, we’re going to ask a court to do that,” it said in a tweet.

Meanwhile, Transport Secretary Chris Grayling said support for the new runway would “clear path to our future as a global nation in the post-Brexit world.”