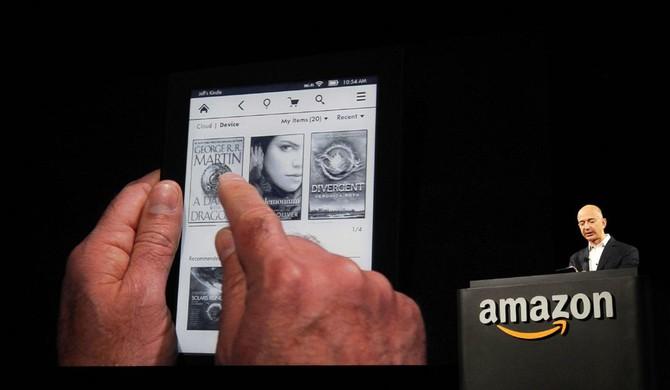 Amazon has launched more than 12,000 Arabic language books on Kindle devices in a move welcomed by book-lovers, publishers and aspiring writers from across the Arabic-speaking world.

Readers are now able to access a selection of popular Arabic publications including books from well-known authors such as Egypt’s Naguib Mahfouz; Ibrahim Nasrallah’s award-winning work, “The Second Year of the Dog,” as well as translated popular English language books such as “Harry Potter and the Philosopher’s Stone.”

“Finally, my work will reach Arabic readers across the world,” said Algerian best-selling author, Ahlam Mosteghanemi. “I am thrilled that Amazon has opened this service, breaking the distances between the Arabic book and its readers.”

“We’ve already seen great interest from our finest authors, writers, and scholars, to publish their Arabic titles for Kindle,” said Bassam Chebaro, CEO of Arab Scientific Publishers, in a statement.

Sail Publishing is an Emirati publishing house that produces an English-Emirati online magazine as well as digital books and magazines.

She added that for that increase in reading to happen Amazon needs more publishers to ensure they sign up to Kindle.

“It is a matter of on-boarding all the publishers and encouraging them to do a simultaneous publishing. So at the moment you publish in print — you should as well be appearing in Kindle at the same time,” she said.

There have been recent efforts to encourage more reading in the UAE. In 2016 the Gulf state launched a “Year of Reading” which aimed to encourage more people to read every day. The government-backed project encouraged the setting up of libraries and ran reading competitions for children and young people.

Ben Chaibah said she’s already seen anecdotal signs that since 2016 more Emiratis are starting to read books in public, a trend that will only become more prevalent with the launch of more Arabic titles on the portable Kindle device.

“People are no longer hiding it if they are reading. They are no longer worrying that I read in public because what are people going to say. People are more comfortable with it, which for me is a good difference.

“Previously you would find that the expat community in general is very ok with reading in public, but now you find local people in coffee shops with a book and reading which is a transition I don’t think I noticed before 2016,” she said.

The Kindle is also equipped to allow authors to self-publish their books in Arabic with the Kindle Direct Publishing service. An earlier Beta version of this service was launched in December last year.

Ben Chaibah said she expects that writers of young adult fiction — who are often typically rejected by traditional publishers — will explore the opportunity to self-publish on the Kindle.

The launch of the Arabic service comes as Amazon builds up its presence in the Middle East. Last year it acquired the UAE-based online retailer souq.com. Amazon also launched its video streaming service Amazon Prime in the UAE in 2016.

“We are excited to make Arabic language Kindle books available to the hundreds of millions of Arabic speakers around the world,” said David Naggar, vice president of Kindle. “This is another step in our ongoing work to provide more choice and selection to readers.”

Readers will be able to use the Arabic Kindle service in a similar way to other Kindle users Users can sample books before buying them, as well as look up words via a dictionary, adjust text size, margin setting and background colors as well as use a search function in the text.