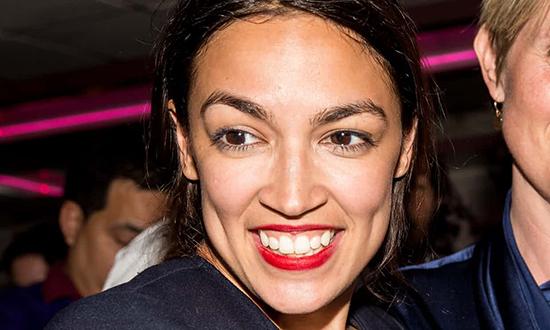 Joe Crowley, a 10-term Democrat pegged as his party’s next leader in Congress, lost his party’s New York congressional primary to a 28-year-old socialist, in one of the biggest upsets in recent American political history.

With 98% reporting, Alexandria Ocasio-Cortez had 57.5% and Crowley had 42.5%, in a majority minority district that included parts of Queens and the Bronx.

Ocasio-Cortez, a Puerto-Rican American and former Bernie Sanders volunteer, defeated Crowley in his re-election bid Tuesday night, after hitting the incumbent on his ties to Wall Street and accusing him of being out of touch with his increasingly diverse district.

Crowley, head of the Queens county Democratic party and the fourth-ranking Democrat in the House of Representatives, was considered to be Nancy Pelosi’s likely successor as House speaker if she stepped down.

The result was compared to the shock defeat of Eric Cantor, the No 2 House Republican, to a Tea Party candidate, David Brat, in 2014. Cantor’s defeat stopped any momentum for Republicans in Congress on immigration reform and helped to create the House Freedom Caucus and drive out the former speaker John Boehner.

Ocasio-Cortez ran a grassroots campaign and made a surprise visit to the Mexican border on the eve of the election to emphasize her call to abolish the Immigration and Customs Enforcement agency (ICE). Crowley was unwilling to go that far, although he did call the agency “fascist”.

Crowley had expressed confidence about the race in private conversations and as one national Democratic strategist told the Guardian: “The Crowley team did not raise red flags or ask allies for help with his primary.” Prior to 2018, Crowley had not even faced a primary since 2004, years before his 2018 opponent was even eligible to vote. He had raised over $3m for his campaign, 10 times the amount his opponent had.

In a statement, Crowley congratulated Ocasio-Cortez and gave her his backing, adding: “The Trump administration is a threat to everything we stand for here in Queens and the Bronx, and if we don’t win back the House this November, we will lose the nation we love.”

Donald Trump weighed in as well, apparently viewing Crowley’s defeat to a leftwing candidate as a referendum on him. The president wrote on Twitter shortly after the race was called: “Wow! Big Trump Hater Congressman Joe Crowley, who many expected was going to take Nancy Pelosi’s place, just LOST his primary election. In other words, he’s out! That is a big one that nobody saw happening. Perhaps he should have been nicer, and more respectful, to his President!”

Crowley had been considered the only plausible competition for Pelosi as Democratic leader, although he had pledged not to run against her. Well liked within the Democratic caucus, he had recently made a practice of alerting members to his television appearances as an understated method of self-promotion.

Elsewhere on Tuesday night, there were several other progressive victories. In Maryland, Ben Jealous, the former president of the NAACP, won the Democratic primary for governor against Prince George’s county executive, Rushern Baker. Jealous ran as an ardent liberal and touted national supporters such as Bernie Sanders as he called for free college tuition and marijuana legalization. Baker ran as a mainstream Democrat with a host of local establishment endorsements. Jealous will face the incumbent Republican Larry Hogan in November.

In Colorado, Congressman Jared Polis won the primary for governor. Polis ran on a left wing platform, including single-payer healthcare. He will face off against the Republican Walker Stapleton, a member of the Bush political dynasty, in November.

On Staten Island, the former congressman Michael Grimm failed in his comeback attempt against the incumbent Dan Donovan. Grimm, who resigned from Congress after pleading guilty to tax fraud and serving time in federal prison, was attempting to retake his old seat and paint himself as the true disciple of Donald Trump. Donovan, a comparative moderate, received Trump’s endorsement as part of an effort by Republicans to keep themselves from making a seat that Obama won in 2012 even more vulnerable in the midterms. Donovan ended up winning easily.

In South Carolina, just one day after Donald Trump appeared on his behalf at a raucous rally, Governor Henry McMaster pulled off a narrow victory against the businessman John Warren in the runoff for the Republican gubernatorial nomination.

McMaster was the first statewide politician to endorse Trump, in January 2016. He ascended to the governorship after Trump nominated his predecessor, Nikki Haley, to be the US ambassador to the United Nations. In addition to appearing at a rally on McMaster’s behalf, Trump has repeatedly praised the longtime South Carolina politician on Twitter as “a truly fine man” who “loves our military”. McMaster will face the Democratic state representative James Smith in the November general election.

Elsewhere in the Palmetto state, the state senator Will Timmons beat out the conservative firebrand Lee Bright for the Republican nomination in the upstate congressional seat being vacated by Trey Gowdy. Bright, a former state senator, had been an ardent supporter of keeping the Confederate battle flag on the grounds of the South Carolina state house in the aftermath of the 2015 mass shooting at Emmanuel AME church in Charleston and had previously mounted a long-shot primary campaign against Lindsey Graham in 2014, calling him insufficiently conservative.

In Utah, the former 2012 Republican presidential nominee Mitt Romney easily won his party’s nomination for US Senate. Romney had previously served as governor of Massachusetts.