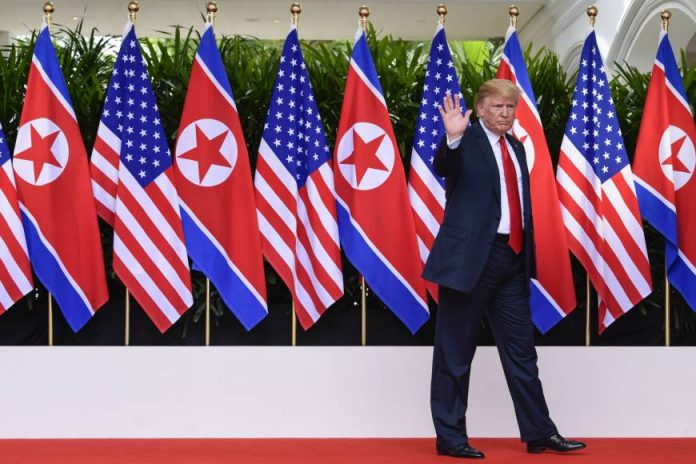 WASHINGTON – If the Singapore summit put North Korea on a path to eliminating its nuclear weapons, as President Donald Trump says it has, then it also may have poked a hole in the Pentagon’s main argument for a multibillion-dollar expansion of homeland missile defenses.

The Singapore declaration by Trump and North Korean leader Kim Jong Un said Kim agreed to “work toward complete denuclearization of the Korean Peninsula.” It did not define a process, say when it would begin or say how long it might take.

Even so, Trump tweeted afterward, “There is no longer a nuclear threat from North Korea.”

Trump’s own administration later contradicted him by saying the threat remains. But if Kim does disarm, then Congress may see less logic in spending $6 billion or more to expand a missile defense system based in Alaska that is designed mainly with North Korea in mind. The Alaska system, which consists of 44 missile interceptors that would be launched from underground silos to shoot down enemy missiles streaking toward the United States, is not the only element of U.S. missile defense. But it is among the most expensive and is due to expand over the next five years.

“If real progress is made in restraining or even eliminating North Korea’s missile arsenal and production, it would remove the main driver for national missile defense,” said Jon Wolfsthal, who was national security adviser to Vice President Joe Biden and is now director of the Nuclear Crisis Group, focused on preventing the use of nuclear weapons.

The U.S. military has numerous defenses against nonstrategic missile threats, such as those that would endanger U.S. or allied troops on the Korean Peninsula or in Europe. But the only one designed to shoot down intercontinental ballistic missiles aimed at the U.S., like those North Korea has been building, is the Alaska system.

The basic approach of the Alaska system is to fire a rocket into space upon detection of a hostile missile heading toward the U.S. The rocket would release a 5-foot-long (1.5-meter) device called a “kill vehicle” that uses internal guidance systems to steer itself into the path of the oncoming missile’s warhead, destroying it by force of impact. It’s officially known as the Ground-based Midcourse Defense system, and the Pentagon likens it to hitting a bullet with a bullet.

When Defense Secretary Jim Mattis visited the Alaska site at Fort Greely on Monday, he acknowledged that the Singapore summit had introduced a new element into the missile defense equation, saying he would need a crystal ball to know the way forward.

“Even if one threat goes away, we have to stay alert to other things in the world,” he added, suggesting it is too soon to pull back from the planned expansion in Alaska. The missile interceptors at the Alaska site could provide protection of the U.S. against threats from Iran, though Iran currently has no nuclear weapons or missiles capable of reaching U.S. soil.

The Pentagon is moving forward with plans to upgrade missile defense systems designed to counter a strike by North Korea against Seoul or other regional allies, according to the director of the U.S. Missile Defense Agency.

The Defense Department is sticking with plans to bolster the high-altitude interceptor known as THAAD as well as lower-altitude Patriot interceptor batteries deployed on the Korean Peninsula, Greaves said.

The missile defense upgrades were aided by Senate passage last week of its version of the $716 billion defense policy bill, which authorized an extra $284 million for the improvements, more than the $81 million requested by the Pentagon to continue the integration effort.

THAAD — the Terminal High Altitude Area Defense system — was controversial even before Trump allowed its deployment to go forward in April 2017. With its advanced radar and its ability to target short- and medium-range missiles at high altitudes in their “terminal” phase, as they descend, China says THAAD threatens its security and has repeatedly called for its removal from the Korean Peninsula.

The system’s installation was also greeted by some protests in South Korea. President Moon Jae-in denounced the deployment before he was elected, though he later embraced it as North Korea ramped up its ballistic missile and nuclear bomb tests.

One improvement will be introducing on the Korean Peninsula the latest, more powerful version of the Patriot missile and integrating it with THAAD batteries, according to Greaves. Another will be to develop and field a communications capability that lets a THAAD missile launcher move farther from its command location, covering a wider area.

The Trump administration says its defense policies are oriented toward “great power” competition with Russia and China, but defenses against strategic missiles from those countries are unlikely to be anchored in Alaska. The administration is believed to be reviewing a range of space-based options for a more comprehensive missile defense.

Frank Rose, a former senior arms control official at the State Department during the Obama administration, said Mattis appears to be taking a prudent approach by testing North Korea’s intentions to disarm before changing course.

“If we get in a situation where North Korea is eliminating, in a verifiable manner, their nuclear program and their ballistic missile program … we would definitely need to reassess” the direction of missile defense, Rose said. “That would make sense. But until we are in that position, I think we need to continue with the (missile defense) program as outlined.” Rose is now a senior fellow at the Brookings Institution think tank.

As it happens, the Pentagon is now completing a lengthy, in-depth review of its missile defense policies and programs. When that was started last year, there was little prospect of a Trump-Kim summit or of North Korean nuclear disarmament. Among other worrisome developments, from a U.S. point of view, the North had demonstrated its ability to launch an ICBM, and it was hinting at test-firing a nuclear missile into the Pacific.

Against that backdrop, Congress this year approved the Pentagon’s plan to build and deploy an extra 20 missile interceptors in Alaska by 2023. The price tag has not been spelled out in detail, but the Missile Defense Agency, which manages the program, awarded a contract to Boeing Co. this year that suggests the cost is in the range of $6.5 billion.