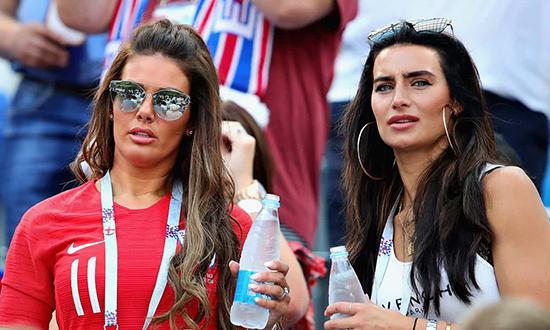 Her recent comments about supporting her footballer husband are not the rallying cry I was hoping for, even if she’s on the money about the outdated term ‘Wag’

It feels like it must have been the 1990s, but it was actually 2006 that the term Wag was coined. It describes the wives and girlfriends of the football team who, without looking it up, just by the law of averages, I am going to call “doomed England.”

Indeed, part of the flurry around the women surrounding the players was a resigned displacement activity, in the way that you go on and on about Christmas carols when you know you are not going to get any good presents.

The problem then was the dual sexism of both objectifying the Wags – so much attention was fixed on their breasts that the issue became impossible to drop, and the entire summer thereafter was taken up chasing Cheryl Tweedy and Coleen McLoughlin (this was before they became Cole and Rooney) around beaches shooting for a proper view – and defining them by their husbands and boyfriends. It was like a horrific Doctor Who time-travelling mashup of 50s and 90s sexism, the worst of both, no decent argument lodged against either.

The full-voiced rebuttal of Rebekah Vardy (“Wag is a dated term because we’re not defined by what our husbands do. We’re individuals”), wife of Leicester City and England striker Jamie, is to be welcomed regardless of what she says, really, because a core problem of the first Wag wave was that no one ever listened to anything they actually said. Except … “The wives and girlfriends have a much lower profile now and that is how it should be. Our job is to be supportive,” she said this week. “I would be mortified if I was pictured leaving a bar absolutely pissed knowing that my husband was going to play one of the biggest games of his life the next day.”

This distils modern life, for me: there was so much wrong with the 2006 Wag trope, but it did one thing right, which was that they were followed around because they looked as though they were enjoying themselves. There was something so exuberant about the scene. The spinoffs were wonderful – Wags Come Dine With Me was joie de vivre on a plate, and everyone would have laughed at their pronunciation of “vivre” or “de”, as they did when Jessica Lawlor pronounced Thai chicken “thigh chicken”, but that was really just an edge to mask the embarrassment of the national affection for them. Going full stand-by-your-man 50s on the matter is not the World Cup feminist revolution for which I had hoped.