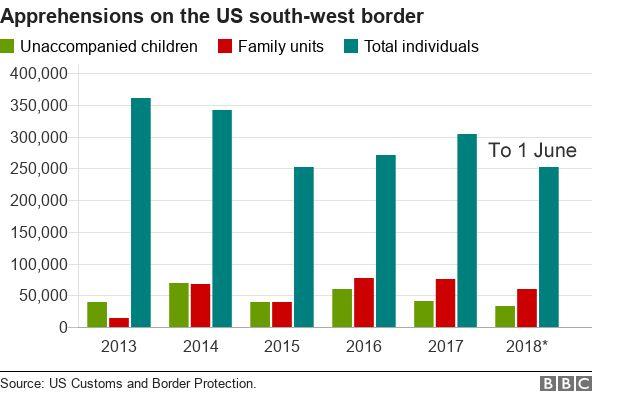 Seventeen US states have sued the Trump administration over its “cruel and unlawful” break-up of migrant families.

The legal action objects to the policy of refusing entry to asylum seekers at the US-Mexico border.

Meanwhile, Vice-President Mike Pence has warned undocumented immigrants not to “risk the lives of your children” by trying to enter the US illegally.

At a news conference in Brazil, Mr Pence said he had a message “straight from my heart” for those planning a journey to America: “If you can’t come legally, don’t come at all.”

“Don’t risk your lives or the lives of your children by trying to come to the United States on a road run by drug smugglers and human traffickers,” Mr Pence added.

In legal action filed on Tuesday with the US District Court in Seattle, Washington, Mr Trump’s 20 June order to keep migrant families together was also described as “illusory”.

It is the first legal challenge over family separation from the states, which argue that the Republican president’s executive order denies migrant families due process and the right to seek asylum.

States are now seeking a court order to reunite families and end the separation practice by declaring it “contrary to the Constitution”.

Tuesday’s lawsuit states that Mr Trump’s order does not mandate the end of family separation and says nothing about reuniting families who have already been separated.

It also calls the policy “an affront” to the states’ interests in maintaining standards of care for children and preserving parent-child relationships.

“The policy, and the administration’s related conduct, has caused severe and immediate harm to the States and their residents.”

New Jersey Attorney General Gurbir Grewal said in a statement that the practice of separating families “is cruel, plain and simple”, the Associated Press reported.

A press release from New York Attorney General Barbara Underwood referenced migrant children held in New York City who have had to be treated for depression, anxiety and suicidal behaviour.

“By tearing children away from their parents and sending them hundreds of miles away, the Trump administration has already caused unfathomable trauma to these children, while undermining New York’s fundamental interests in protecting their health, safety, and wellbeing,” Ms Underwood said.

During a conference call with US media on Tuesday, the US health department’s Office of Refugee Resettlement (ORR) confirmed that 2,047 migrant children were currently still in the care of the agency.

The children have been sent to holding cells, converted warehouses, desert tents or foster care around the US.

ORR said there are 11,800 children in the agency’s nationwide shelter network. Most of these children are unaccompanied minors who came across the border without a parent or guardian.

ORR director Scott Lloyd refused to say whether the agency was still receiving migrant children who had been separated from their families.

Lawmakers on Capitol Hill have also requested information about the cost of family separation from DHS and HHS Secretaries Alex Azar and Kirstjen Nielsen.

“The public deserves a complete and thorough accounting of exactly how much of their money you have spent breaking up thousands of families on our southern border,” the letter reads.

More than 100 congressional lawmakers have signed the accounting request, which gives the agencies a deadline of 10 July to detail the costs.

On Monday, the nation’s top border security official told reporters in Texas he had temporarily stopped referring migrants who illegally entered the country with children for criminal prosecution.

Customs and Border Protection (CBP) Commissioner Kevin McAleenan said it followed Mr Trump’s order, but the president had suggested detaining families together instead.

The lawsuit is similar to the case against the Trump administration’s travel ban, which was initially blocked by Hawaii until the Supreme Court reversed the ruling on Tuesday morning.

What is a Presidential Transition and How Does It Work in the US?