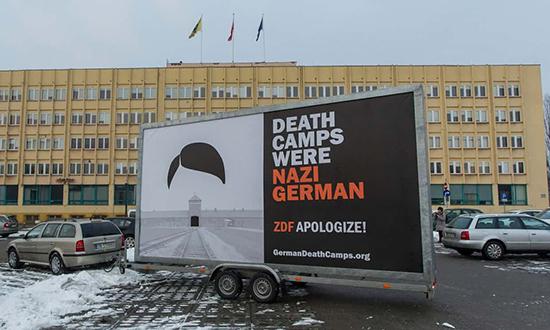 The lower house of the Polish parliament has voted to decriminalise the false attribution to Poland and Poles of crimes committed by Nazi Germany during the Holocaust, signalling a partial retreat on contentious legislation enacted this year.

During an emergency parliamentary session on Wednesday morning, the prime minister, Mateusz Morawiecki, of the ruling rightwing Law and Justice party, told MPs that the legislation had succeeded in its aim of raising international awareness of Poland’s role during the second world war.

“A publisher in the United States or in Germany will think twice before publishing today an article using the expression ‘Polish SS’, ‘Polish gestapo’ or ‘Polish concentration camps’ if he risks a lawsuit and a fine of 100m euros or dollars.”

The legislation, which had envisaged prison terms of up to three years for those who contravened the regulations, sparked a war of words between Polish and Israeli politicians, and an outpouring of antisemitic rhetoric in Poland as nationalist and pro-government media sought to portray the country as under attack from an international anti-Polish campaign orchestrated by foreign powers and Jewish advocacy groups abroad.

In May, the Guardian reported that staff at the Auschwitz-Birkenau memorial and museum in southern Poland had been subjected to a wave of “hate, fake news and manipulations” at the height of the controversy.

The legislation also appears to have placed great strain on Poland’s relationship with the US, amid reports that the government had been warned that high-level contacts with US officials would be affected until the issue was resolved.

Some critics of the legislation argue that the government has not gone far enough, noting that the false attribution to Poles of Nazi crimes will remain a civil offence, with Polish courts able to administer fines.

Morawiecki’s spokesman said on Wednesday afternoon that the Polish prime minister and his Israeli counterpart, Benjamin Netanyahu, would both be holding press conferences on Wednesday evening, during which they would “present their joint position” on the legislation.