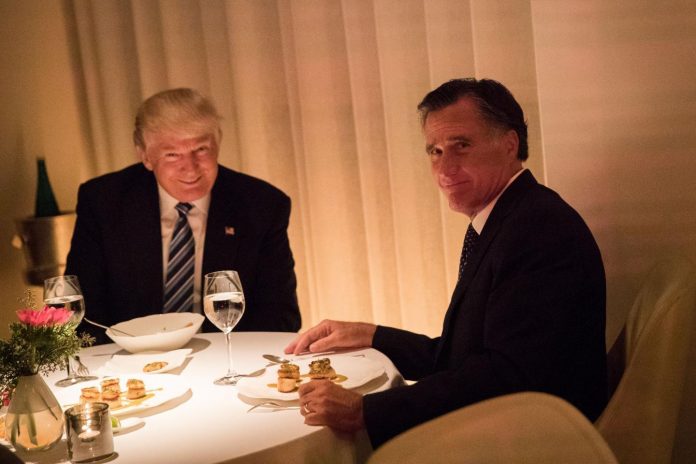 Mitt Romney clinched his party’s nomination for Senate in Utah Tuesday, and will likely breeze through the general election in November. But while the former Massachusetts governor and 2012 presidential candidate doesn’t face much competition in his own state, he does have to navigate a complicated relationship with the man in the Oval Office.

Once a never-Trumper, Romney has since flip-flopped between pledging his support for President Donald Trump and publicly denouncing his policy and rhetoric. Trump has demonstrated on multiple occasions that he isn’t afraid to deride GOP candidates who don’t agree with his politics, and with an 87 percent Republican approval rating his opinion can make or break an election.

“[Romney] recognizes that the base of the party is with President Trump and that in order to be elected he needs to appeal to that base,” said Republican strategist Evan Siegfried. “At the same time, he shows no signs he will abandon his principles for Donald Trump.”

Romney explored this dichotomy in a recent Salt Lake Tribune opinion piece addressing his relationship with Trump.“I will support the president’s policies when I believe they are in the best interest of Utah and the nation,” he wrote.

The senatorial candidate was quick to praise the president. “The first year of his administration has exceeded my expectations,” he said, citing corporate tax cuts, deregulation and the president’s energy first initiative.

But Romney, who refers to himself as a “straight shooter,” also made it clear that he would “continue to speak out when the president says or does something which is divisive, racist, sexist, anti-immigrant, dishonest or destructive to democratic institutions.”

Republican strategists say that Romney will likely fall in line with Senators like Jeff Flake, Bob Corker and John McCain who are not afraid to speak out against the president but typically vote in line with his policy.

“I would love to think he can come in and be this strong voice in the Senate,” said Meghan Milloy, founder of Republican Women for Progress and a consultant to the 2012 Romney campaign. “He resonates with so many Americans and I’d like to believe he’ll be a check on the Trump administration, but I’m worried he’ll follow the all-talk-and-no-action pattern we’ve seen other senators fall into.”

Still, Romney is not a career politician and is not bound by the politics that other senators are, said Siegfried.

“Mitt Romney doesn’t need this,” he explained, echoing an argument often applied to President Trump. “He does not compromise on principles, there will be times that he will line up with the president’s positions but only in instances that he believes in him.” Siegfried sees Romney filling the role of moral leader in Congress, something that is currently “lacking in this country.”

Milloy also remains hopeful that Romney will inspire a return to traditional Republican views. “He won’t be a dormant senator,” she said. “I have to imagine he’ll be the new blood in the Senate that will inspire others to speak out and take action.”