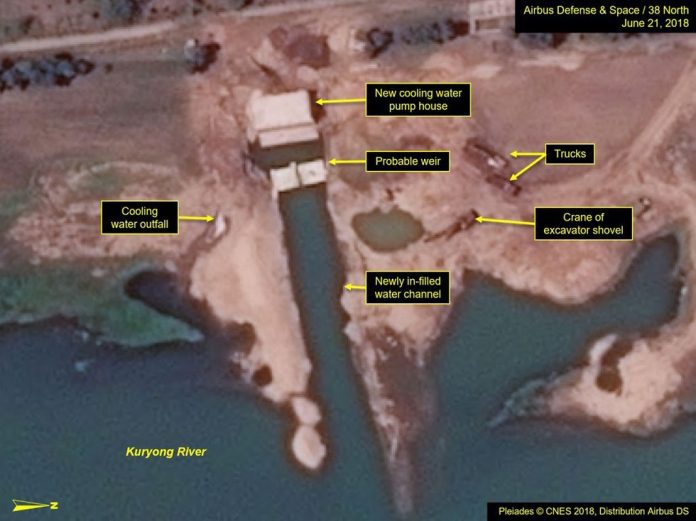 North Korea is making rapid and significant improvements to the infrastructure at the Yongbyon Nuclear Scientific Research Center, despite promises made two weeks ago at the Singapore Summit to denuclearize the Korean peninsula, according to satellite imagery released on Wednesday.

According to the 38 North website, devoted to analysis of North Korea, the improvements are continuing at a rapid pace.

The commercial satellite imagery indicated that the plutonium production reactor’s cooling system has been upgraded and at least two buildings have been added to the compound, likely for VIP visits. An office building, which will likely be used by engineers, has also been complete. Massive construction work is taking place all over the site.

In his meeting with US President Donald Trump on June 12, North Korean leader Kim Jong-un pledged to work towards a “complete denuclearization” of the Korean peninsula, but no real steps have been implemented so far beyond the dramatic statements.

Experts warn, however, that continued work at the Yongbyon facility should not be seen as having any relationship to North Korea’s pledge to denuclearize. “The North’s nuclear cadre can be expected to proceed with business as usual until specific orders are issued from Pyongyang,” the report said.

Meanwhile, officials from both sides of the border met this week for military talks aimed at restoring communication lines, and railway officials agreed to explore connecting the two countries by rail.

According to the British Guardian, checks will begin next month on long-unused lines that once allowed travel across the entire peninsula. Talks began a decade ago but were suspended amid rising tensions, the report said. South Korea already has a gleaming steel and glass station just south of its highly militarized border with the North, with tracks marked for service to Pyongyang.