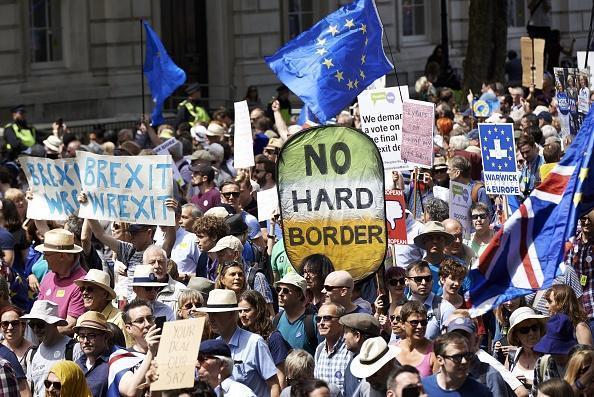 After months of political infighting, Britain passed legislation to end the country’s membership in the European Union. The law was signed by Queen Elizabeth II after having passed both houses of Parliament by a slim margin last week.

In March 2017, the United Kingdom triggered Article 50 of the European Union’s Treaty of Lisbon, which grants the right to withdraw from the bloc. The move launched a two-year process that will ultimately lead to the U.K.’s departure from the EU, meaning that the British government has until February of next year to finish negotiating the terms of its exit with Brussels—the political seat of the European Union—or leave without a deal.

Until now, little progress has been made as the British government, led by Prime Minister Theresa May’s Conservative Party, debates the merits of what has been dubbed a hard or soft Brexit, or how close the country will remain to the EU after its exit.

The new Brexit bill signed on Tuesday doesn’t get the country any closer to an agreement with Europe. It does, however, get the country ready to leave the European Union.

“The U.K. had the European Communities Act that they put in place when they joined [the European Union]. It says EU law supersedes U.K. law after they join. So they needed a bill to make it all British law again; they needed a bill that would transpose EU law into U.K. law,” Frances Burwell, a distinguished fellow at the Atlantic Council and an expert on Europe, told Newsweek.

“After the U.K. is out, it’s expected that they will go through all the laws and decide which ones to keep or modify. But it’s the U.K. preparing itself to leave,” Burwell continued.

Protesters march during the People’s Vote demonstration against Brexit, in London, on June 23. Even if the government agrees on how to move forward with Brexit, much of Britain’s population does not. Simon Dawson/Getty Images

The new law also agreed that the U.K. cannot withdraw from the EU until an agreement has been ratified by both houses of Parliament. The debate over this issue had grown heated in recent months, as lawmakers disagreed over whether Parliament should be permitted to veto a Brexit deal reached between the government and Brussels.

But even if the government agrees on how to move forward, much of Britain’s population does not. Supporters of Britain’s exit from Europe won by just a slim margin in a referendum exactly two years ago. Many analysts suspect people would vote differently today if a new referendum was held.

Tuesday’s Brexit law was signed just days after demonstrators took to the streets for a National Day of Action to protest Britain’s exit from the European Union. The largest protests took place in large population centers like London, Newcastle and Edinburgh, where much of the population voted against Brexit.

Also on Tuesday, Britain’s car manufacturers, one of the country’s largest employers, warned that the industry must keep the benefits of the European Union’s single market, or thousands of jobs would be lost. In a statement, representatives of the car manufacturing industry called on the government to reconsider its negotiating position on Brexit’s single market.

Government figures have been debating whether it would be better for the country to remain in Europe’s customs union or go off on its own, a move that would give the country the freedom to enter into new trade agreements with countries such as the U.S. and Australia on its own. But many argue that the costs of leaving the EU’s single market outweigh the benefits.

“The current position, with conflicting messages and red lines, goes directly against the interests of the U.K. automotive sector, which has thrived on single market and customs union membership,” Michael Hawes, the chief executive of the Society of Motor Manufacturers and Traders, said in a statement.  “There is no credible ‘plan B’ for frictionless customs arrangements, nor is it realistic to expect that new trade deals can be agreed with the rest of the world that will replicate the immense value of trade with the EU. Government must rethink its position on the customs union.”

One of the biggest issues facing the government is how to trade with the EU countries after the U.K. makes a formal exit. Ireland poses an especially tricky problem, since Northern Ireland, which is part of Britain, will leave the EU with the rest of the U.K., while Dublin will stay in the EU. Today, the free movement of people and goods maintains peace and stability between the two Irelands and supports commerce.

“For businesses, the problem is they want clarity now. They want clarity on the customs union,” Burwell said. “This is very much caught up in the Ireland question. There are industries that have localized supply chains that go between [the] Republic and North.”

The European Union will host a summit on Thursday and Friday this week, and Brexit negotiations were expected to be high on the agenda. But Prime Minister May reportedly informed the European Council President Donald Tusk that a white paper outlining Britain’s wishes for a future relationship with Europe would not be presented until after the summit.