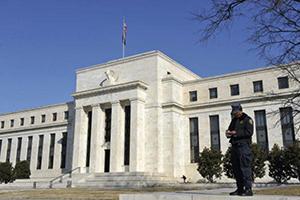 The federal funds interest rate, or what banks charge each other to borrow excess reserves overnight, crept up last week after the U.S. central bank lowered what it pays banks on excess reserves.

That narrowing gap between the federal funds rate and the interest on excess reserves, or IOER, has stoked a debate over whether the Fed’s reduction of its massive bond holdings, which started in October 2017, has made it more expensive for banks to borrow excess reserves to meet regulatory requirements or fund their daily needs, analysts said.

“It’s a signal that perhaps they are closer to their balance sheet bottom than they had previously thought,” said Steven Blitz, chief U.S. economist at TS Lombard in New York.

The spread between the daily average, or “effective” fed funds rate and IOER, contracted to a mere 0.03 percentage point last week.

The move, which surprised some traders and analysts, occurred after the Fed raised the top end of its fed funds target by a quarter point to 2.00 percent and IOER by 0.20 of a percentage point to 1.95 percent on June 13.

Meanwhile, the amount of excess reserves, currently at $1.9 trillion, is projected to decline to $1.7 trillion by year-end, and to $1.2 trillion at the end of 2019.

While excess reserves appear ample, 90 percent of them are controlled by just 5 percent of banks, Morgan Stanley analysts estimate.

“So most U.S. banks do not have much in the way of excess reserves and more of these banks will likely have to resort to borrowing in the (fed funds) market, increasing the demand for reserves,” they wrote in a note on Monday.

Since October 2017, the Fed began to scale back the reinvestment of maturing Treasuries and agency mortgage-backed securities it amassed during three rounds of quantitative easing to combat the recession triggered by the 2007-2009 global credit crisis.

The central bank’s balance sheet has shrunk to $4.3 trillion from $4.5 trillion in September 2017, just before the start of its normalization program.

On this current path, the Fed’s bond holdings and other assets would fall to $3 trillion by early 2021, according to the New York Fed’s latest forecast from April. That is a far cry from a projected $2 trillion back in 2015.

If interbank borrowing costs remain stubbornly high and disrupt broader economic activity, policymakers may have to consider whether to abort the normalization plan early.

“We believe that by early 2019 the Fed will need to seriously consider quantifying the ‘equilibrium level of excess reserves’ in order to prevent bank liquidity stress due to reserve drain,” TD strategists Priya Misra and Gennadiy Goldberg wrote in a recent research note. “This could result in an earlier end of portfolio run-off compared with market expectations of end 2021.”

A large Fed balance sheet is not without cost.

Some analysts have criticized this approach in funding the growing national debt and subsidizing the housing market through the central bank’s holding of mortgage-backed securities.

Other analysts argue that an earlier end to balance sheet normalization may be necessary to support the banking system, especially for smaller banks whose need for reserves appear on the rise.

Moreover, a larger balance sheet is simply required for the growth in money demand since the last recession, they note.

“Our view is that a much larger balance sheet is appropriate,” said Lou Crandall, chief economist at Wrightson ICAP in New York. “It’s not flagging strained conditions. It may be flagging us about the optimal level of reserves.”

William Dudley, the recently departed head of the New York Fed, downplayed the tight gap between IOER and the effective fed funds rate.

“I was always more in the camp that demand for reserves is going to be higher in the new environment because of changes in regulation, like the liquidity coverage ratio that increases the demand for high-quality assets,” Dudley told reporters on a conference call on June 15.

It may be too early for the Fed to slow the shrinkage of its balance sheet.

Still, if the spread between IOER and the fed funds rate stays compressed, it will “likely to keep the issue of early termination of balance sheet normalization on the front burner,” Citi analysts recently wrote to clients.