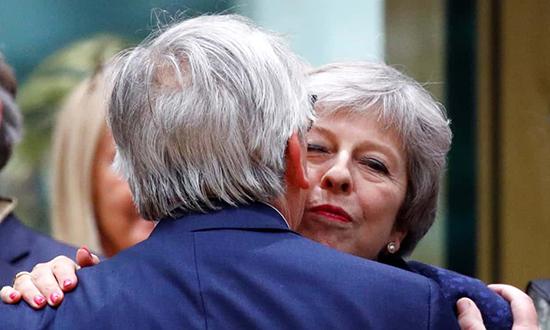 Brexit negotiations cannot go on with a divided British cabinet, Jean-Claude Juncker has said, as European leaders expressed concern that they do not know who is in charge.

With major figures in the UK government still at odds on key issues, the European commission president said Brussels desperately needed a clear, coherent vision for the future.

At a summit of EU leaders in Brussels, Juncker told reporters: “I don’t have to lecture Theresa May, but I would like our British friends to make clear their position.

“We cannot go on to live with a split cabinet. They have to say what they want and we will respond to that.”

May is due to address EU leaders at a dinner on Thursday evening, where she will sketch out her plans for the coming days. She will hold a meeting of her divided cabinet at Chequers on Friday, before the intended publication of a white paper on Britain’s future relationship with the EU the following week.

However, beyond the need to hear a coherent vision for the future trading relationship, leaders were most concerned by the absence of any progress on avoiding a hard border on the island of Ireland.

The 27 EU leaders will sign off on a statement on Friday morning, calling for intensified work in the talks, and offering a grave warning of the threat of the UK leaving the bloc on 29 March 2019 without a deal or transition period agreed.

The Dutch prime minister, Mark Rutte, expressed the concern of many that it was unclear as to who was directing government policy on Brexit, with the cabinet said to be split over how close the UK should align with the EU once it leaves the bloc.

Rutte said: “I don’t want to talk in apocalyptic terms, but what I want to say is I believe the first, second and third priority now is to solve this issue of the Irish border.”

When asked if the EU was being too rigid in its approach, he said: “The problem is to whom should we listen because our contact of course is Theresa May. I know she is working day and night to solve this but the first issue on the table we have to solve now is the Irish border.”

He added: “Time is getting small now.”

Arriving in Brussels shortly after Juncker’s remarks, May brushed off claims of cabinet disunity, and insisted she was ready to press ahead with Brexit talks “at pace”.

She said: “As regards our discussions on Brexit, I look forward to talking with my fellow leaders about the very good progress we’ve made on the withdrawal agreement; and looking forward to securing a strong future partnership, which I think is in the interests of the European Union, and the United Kingdom.

“I think both sides are keen to continue their work at a faster pace than we have done up till now, and we certainly would welcome that.”

She added: “Now we will be bringing the cabinet together, within the next week; we will then be publishing the white paper, fleshing out in more detail what strong partnership the UK wants to see with the European Union in future.”

May highlighted Wednesday’s decision to strengthen the powers of the anti-chemical weapons watchdog, the Organisation for the Prohibition of Chemical Weapons, as an example of Britain’s continued commitment “to the EU’s security and prosperity, now and when we leave”.

The Irish taoiseach, Leo Varadkar, said the UK still appeared to believe it was an equal partner in the talks.

He said: “We are two years telling people that it can’t be cherry-picking, it can’t be cake and eat it, so it [the white paper] needs to understand we are a union of 27 member states, 500 million people.

“We have laws and rules and principles and they can’t be changed for any one country, even a country like Britain. Any relationship in the future between the EU and UK isn’t going to be one of absolute equals.

“We’re 27 member states, the EU is one country, we’re 500 million people, the UK is 60 million, so that basic fact needs to be realised and understood.”