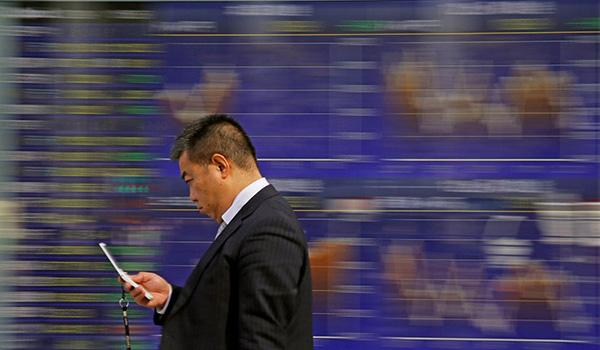 SHANGHAI (Reuters) – Asian shares remained near nine-month lows on Friday despite small gains on Wall Street overnight, as ongoing concerns over global trade frictions dampened sentiment, though a move to ease foreign investment curbs in China could boost markets there.

MSCI’s broadest index of Asia-Pacific shares outside Japan was flat, Australian shares were 0.1 percent higher, while Japan’s Nikkei stock index was down 0.2 percent.

On Thursday evening, China released details of a long-anticipated easing on foreign investment curbs on sectors including banking, automobiles, heavy industry and agriculture, as it moved to open its domestic markets.

In addition to confirming already announced pledges to remove ownership limits fully on industries such as insurance and autos within the next three to five years, China will also ease or scrap ownership caps on businesses including ship and aircraft manufacturing, power grids and the breeding of crops, excluding wheat and corn.

The U.S. dollar index, which measures the greenback against a basket of six currencies, pulled back from near one-year highs to 95.253. The currency has risen in recent weeks, helped by the U.S. Federal Reserve’s move to raise interest rates in June, and expectations of further hikes this year.

Trade wars and emerging markets “fragility stand at the forefront of investor concerns,” Citi analysts said in a note Friday.

The yield on benchmark 10-year Treasury notes fell slightly to 2.8419 percent compared with its U.S. close of 2.847 percent on Thursday, as investors picked up safe-haven assets.

The two-year yield, which rises with traders’ expectations of higher Fed fund rates, was at 2.5161 percent compared with a U.S. close of 2.52 percent.

Oil prices stepped back from the three-and-a-half-year highs on Thursday over concerns that U.S. sanctions could sharply cut crude exports from Iran.

The commodity has been hit also by supply worries due to falling U.S. crude stockpiles, and production disruption in Canada after Syncrude Canada’s oil sands facility in Alberta province suffered a power outage.

U.S. crude dipped 0.1 perccent to $73.38 a barrel. Brent crude was also 0.1 percent lower at $77.79 per barrel. Despite broad interest in safe-haven investments, gold remained near six-month lows, weighed down by trade worries, interest rate expectations and the strong dollar.