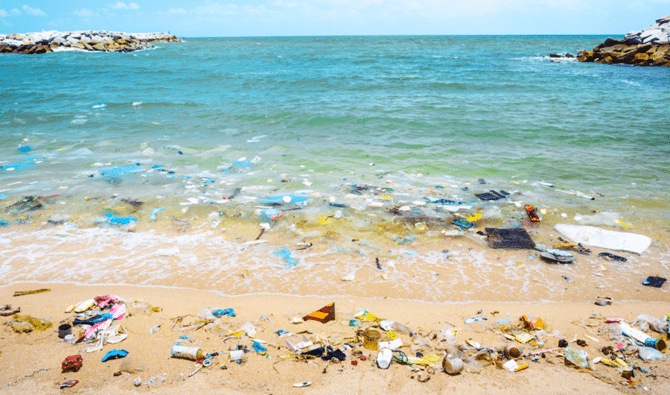 ABU DHABI:  As Oman takes steps toward a healthier environment by banning plastic bags, the race against pollution in the region is gaining pace, with Saudi Arabia and the UAE trying innovative approaches to tackle the problem.

The Sultanate’s Ministry of Environment and Climate Affairs announced earlier this month that it would soon ban plastic bags from all supermarkets. The announcement was made on World Environment Day as the first major move against single-use plastic in the Gulf.

And although the road ahead seems long, the Middle East is gearing up to play its part in reducing the estimated 1 trillion plastic bags discarded worldwide every year.

“It has become a global epidemic, which is increasingly threatening the existence of the Earth and living beings,” said Peter Avram, director of the Dubai-based Avani Middle East, which produces disposable packaging solutions and compostable plastic alternatives.

“The difficult part is the implementation, but we go to schools to try to engage with students to see how we can work with them. There is definitely a solution there and we started trading with hospitality companies in Saudi Arabia — we passed the hill and the momentum is there.”

In the UAE, where more than 13 billion plastic bags are discarded every year, the Emirates Authority for Standardization and Metrology has been monitoring the certification of plastic bags and other disposable articles as oxo-degradable.

In Saudi Arabia, the Saudi Standards, Metrology and Quality Organization issued a regulation in 2016 requiring certain plastics, including shopping bags, to be made of approved oxo-degradable material since December last year.

“Supermarkets sometimes use 20 plastic bags per person,” said Tatiana Antonelli Abella, founder of the green social enterprise Goumbook in the UAE. “The Gulf is based on convenience, so they want to offer the best customer service. Giving away plastic bags has been associated with service.”

She pointed the finger at a lack of awareness, which was once the case in European countries. “Although the EU has made it mandatory to reduce the use of plastic bags, it hasn’t been easy,” Abella said. “That’s where you need education, but you also need regulation to support the businesses because it’s a big deal for a supermarket alone to take this decision.

The figures are alarming. Nine million tons of plastic waste ends up in the world’s oceans annually. “We have seen the effect of plastic bags on marine life and the marine environment,” said Natalie Banks, managing director of Azraq, a marine conservation organization in the UAE.

“Oceans provide us with clean oxygen to breathe — they are a life-support system. But we are slowly killing (this) system through the use of plastic, particularly single-use plastic. To save the oceans and the precious marine animals, we need to do something before it’s too late.”

According to the European Commission, more than 150 million tons of plastic have accumulated in the world’s oceans. Plastic floating on the ocean surface kills an estimated 1 million sea birds and hundreds of thousands of marine mammals annually.

“Every day we hear about the impact on coral reefs and marine animals,” Banks said. “We need to do something.”

Banks believes the ban in Oman will have a ripple effect, leading to a more mature discussion about plastic use.

Avani estimates there are five plastic gyres — accumulated zones of plastic waste — floating in the world’s oceans, with the biggest, off the coast of California, said to be larger than Europe. With 500 billion plastic bags used worldwide every year, enough of the toxic material is thrown away annually to circle the Earth four times.

In the Gulf, the statistics are just as disturbing. According to the Gulf Petrochemicals and Chemicals Association, Saudi Arabia accounted for 67 percent of GCC plastic resins production in 2016 and was the largest polymers consumer, accounting for 61 percent of the 5 million ton-consumption in the GCC, followed by the UAE at 19 percent.

With plastic representing about 18 percent of total solid waste generated in the region and only about 10 percent of plastic waste recycled, serious action is needed.

“There is significant momentum for initiatives by retailers and hospitality businesses to reduce their use of single-use plastic waste,” Avram said. “Supermarkets and retailers in across Europe have been charging consumers for single-use plastic bags. Our aim is to reduce the accumulated plastics from human activities by providing products that use ground-breaking technology … to produce alternatives to plastic products.”

Last year, Avani Middle East launched sustainable packaging solutions and compostable plastic alternatives in the UAE — a first for the region. “They are environmentally safe, reduce pollution and carbon dioxide emissions by 20 percent compared with oil-made plastic bags, and are safe for animals and marine life,” Avram said.

“The oxo-biodegradable bag, called Bio-Cassava Bags, degrades in 180 days or less, while normal plastic takes 50 to 1,000 years to degrade.”

The movement in the Gulf will require government, consumers and businesses to work toward the end goal. “One way is either banning plastic bags completely or taxing the bags, like Waitrose in Abu Dhabi started doing by charging 25 fils per bag since June 16, and having reusable bags available,” Banks said. “Some independent places have paper bags, too, so we’re on the precipice of change right now.”

The 12-week Waitrose trial was rolled out at five stores in the capital, with funds raised from the sale of bags donated to environmental conservation projects. The results will be used to develop a draft public policy to charge for single-use plastic bags in marketplaces.

“During this year, we expect to engage with the Department of Economic Development to assess the economic and social impact of the implementation of the policy,” said Dr. Mohamed Al-Madfaei, executive director of integrated environment policy and planning at the Environment Agency Abu Dhabi.

“We will also engage with plastic bag manufacturers and others who will be affected by the change in policy, and with the Ministry of Climate Change and Environment since they are also considering a set of measures to reduce the use of plastic bags in the UAE.”

Studies suggest a wide-ranging ban on the use of plastic bags may not be an effective response in the face of weak enforcement of the law.

According to Janet Hartzenberg, business outreach coordinator at RAK Recycles, Oman’s plan will not be easy to implement. “You need to find alternatives before you ban all plastic,” she said. “Single-use plastic is easier to ban and our biggest culprit is retail plastic. Putting a ban on that or making people pay for it is more realistic.”

She said Oman had started a valuable conversation in the region. “It’s raising the awareness of the magnitude of the problem,” she said. “Every country has a different set of logistics. Saudi Arabia would have to think about that carefully, as Oman is a relatively small country so it’s easier to regulate and implement it.”

But with the region surrounded by water, plastic poses the largest threat to its environment. “The biggest damage that single-use plastic is doing is getting in the oceans because microplastics in the water get into the food chain and coral reefs,” Hartzenberg said.

“People need to start thinking about the end of the life of the product they are using today — it’s a mindset,” he said.