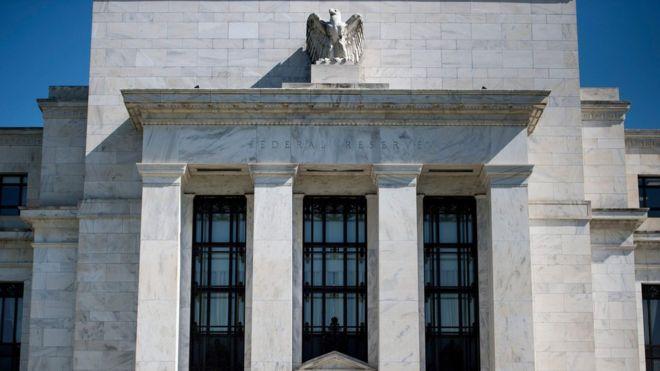 Deutsche Bank’s US division has failed the second round of the Federal Reserve’s annual two-stage stress tests, designed to assess how well the sector could withstand another financial crisis.

The German lender suffered from “widespread and critical deficiencies” in parts of its business, the Fed said.

Goldman Sachs and Morgan Stanley were only granted “conditional” passes.

But 31 of the 35 banks tested were given the all-clear.

Stress tests were introduced in the wake of the 2008 financial crisis and every year America’s central bank, the Federal Reserve, puts the country’s banks, including foreign subsidiaries operating in the country, through their paces.

The Fed measures whether banks are holding sufficient capital to cope with a recession and in the second part of the process it focuses on banks’ “capital plans” such as how much cash they intend to return to shareholders. However this is the first year that the results of the US units of foreign banks have been publicly released.

All of the 35 largest banks subject to the tests passed the first part of the tests last week.

But the Fed found Deutsche Bank’s US arm had “material weaknesses in the firm’s data capabilities and controls supporting its capital planning process, as well as weaknesses in its approaches and assumptions used to forecast revenues and losses under stress”.

The verdict is another blow for the troubled German lender whose financial health has been under the spotlight recently. And it will require the bank to make changes to the way it operates in the US.

Goldman Sachs and Morgan Stanley were given passes, but will not be permitted to increase the amount they return to shareholders beyond levels inline with the last couple of years, in order to bolster their capital cushions.

The Fed said it was also granting a conditional pass to Boston-based State Street, which will be required to take additional steps to manage and analyse its exposure to losses.

Last year was the first time all banks passed the second round of the tests.

The second part of the tests is closely watched because it determines how much firms can return to shareholders in the form of items like share buybacks and dividends.

The Fed said it had granted the conditional pass to Goldman and Morgan Stanley because the companies’ results had been skewed by tax changes passed last year.

The tax overhaul lowered the corporate rate from 35% to 21%, but led to larger-than-usual one-off tax bills for many banks, as a result of other changes to how losses and overseas profits are taxed.

“This one-time reduction does not reflect a firm’s performance under stress and firms can expect higher post-tax earnings going forward,” the Fed said.

Despite the restrictions, Goldman will still be permitted to spend up to $6.3bn on share buybacks and dividends this year.

Morgan Stanley said it planned to return $6.8bn to shareholders.

The decision is the latest blow for troubled Deutsche Bank. Last month the firm announced more than 7,000 job cuts and its credit rating was cut by Standard & Poor’s. The bank reported an annual loss of €500m (£438m) at the end of February.

Deutsche said its US division had “made significant investments to improve its capital planning capabilities as well as controls and infrastructure.”

“Deutsche Bank USA continues to make progress across a range of programmes and will continue to build on these efforts and to engage constructively with regulators to meet both internal and regulatory expectations,” the bank said.

The bank will be required to improve its operations, risk management and governance as a result of the test-failure. It will not be able to make distributions to its German parent firm without the Fed’s approval.