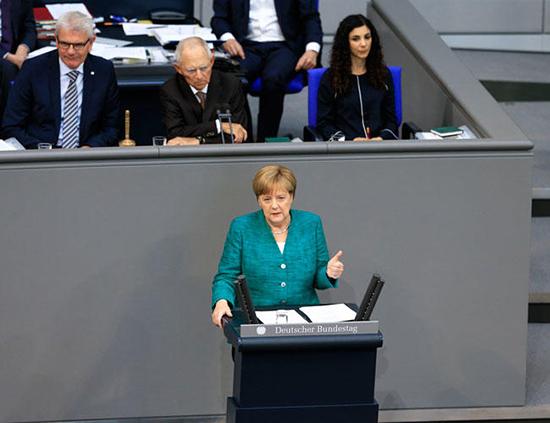 German Chancellor Angela Merkel on June 28 called on EU member states to agree this week to allocate an additional 3 billion euros in assistance for Syrian refugees in Turkey.

Addressing lawmakers in Germany’s parliament ahead of an EU leaders’ summit in Brussels, Merkel underlined that the EU-Turkey agreement of 2016 has been successful in reducing irregular migration flows, and reaffirmed the EU’s financial pledge as part of the deal.

“I hope that the European Council will now bring together the second 3 billion euro tranche, and then we will be able to say again that we are helping Turkey in overcoming the challenges of having over 3 million Syrian refugees,” she said.

The leaders of 28 EU member states are gathering in Brussels on June 28 for a two-day summit that will focus on the refugee crisis and proposals for an EU-wide asylum.

Merkel praised Turkey’s efforts for more than 3 million refugees it has hosted since the beginning of the Syrian civil war, stressing that Europeans should be grateful for that accomplishment, despite political differences between Brussels and Ankara on a number of political issues. “Whatever you may say about Turkey, that is a fantastic achievement that Turkey has done here,” she stressed.

In March 2016, the EU and Turkey reached an agreement to stop irregular migration through the Aegean Sea, and improve the conditions of more than 3 million Syrian refugees in Turkey.

The EU pledged 6 billion euros ($7.44 billion) in funding for the refugees, and promised to mobilize the second 3 billion euro ($3.72 billion) tranche by the end of 2018.

Turkey hosts some 3.5 million Syrians. Ankara says it has spent around $25 billion helping and sheltering refugees since 2011, the beginning of the Syrian civil war.