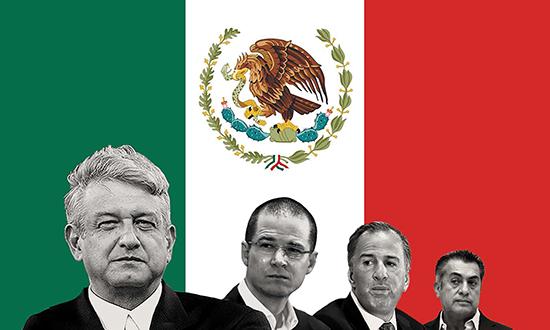 Voters will choose their next president Sunday at a time of disillusionment at unchecked corruption, poverty and violence

What’s the story and what is at stake?

Latin America’s second largest economy will go to the polls on Sunday to choose its next president and a new congress at a time of widespread disillusionment at unchecked corruption, poverty and violence that has claimed at least 200,000 lives since 2007.

The presidential frontrunner, a 64-year-old leftist called Andrés Manuel López Obrador, has claimed his widely anticipated landslide victory will represent the fourth great sea change in Mexican history after independence in 1821, the 1857-1860 War of the Reform and the Mexican revolution of 1910.

“It seems like a dream but we are just a few days away from achieving Mexico’s transformation,” López Obrador, or Amlo as he is best known, told flag-waving supporters during a recent rally in the rundown satellite city of Ecatepec.

Amlo’s foes beg to differ, painting him as a democracy-allergic, Hugo Chávez-style demagogue who will indeed transform Mexico – by crashing its economy.

But many on Mexico’s left are not convinced Amlo will be much of a radical once in power, and analysts say that a better comparison is with Brazil’s former president Luiz Inácio Lula da Silva, who oversaw a period of economic growth even as he battled inequality.

Who else is in the running for the presidency?

Amlo’s consistent dominance in the polls has been such that his opponents have often seemed an irrelevance.

Perhaps the only man capable of spoiling his party on Sunday is Ricardo Anaya, a shaven-headed 39-year-old lawyer from the National Action party (Pan) who profilers have described as a curious mix of yoga fanatic and cut-throat political operator.

In a recent interview with the Guardian one of Anaya’s campaign chiefs, Jorge Castañeda, described him as a “young, dynamic, intelligent, quick-footed [and] very well-trained” candidate with a vision of the future that contrasted with what he called Amlo’s backwards-looking nationalism.

Voters seem unsure, however. In recent weeks the campaign of Anaya’s left-right coalition appears to have stalled amid corruption allegations he has denied and questions over his supposedly machiavellian bent.

Bringing up the rear is Jaime “El Bronco” Rodríguez, an eccentric former governor who is running as an independent and boasts the support of just 3% of voters, according to the latest polls. His main contribution to the presidential race has been an incendiary pledge to tackle corruption by chopping the hands off criminals.

What are the key election issues?

Some analysts have attributed Amlo’s runaway lead to Donald Trump’s attempts to browbeat Mexico’s leaders over immigration and trade. According to that version, Mexican voters are intent on electing a strongman leader capable of hitting back at Trump’s bullying.

Amlo has dropped some hints that he might take a tougher line with the US president, including publishing a book called: A New Hope For Mexico: Saying No to Corruption, Violence, and Trump’s Wall or in Spanish simply, Oye, Trump (Listen, Trump!). Last week he denounced Trump’s “arrogant, racist and inhuman” family separation policy.

But this year’s election is far more about domestic issues than foreign policy: primarily the rampant corruption and crime that have left Mexico’s 88 million registered voters furious and afraid.

In May, Mexico suffered nearly 2,900 murders, its most violent month in two decades. More than 120 political candidates have been killed since campaigning for this weekend’s election officially began last September. Meanwhile the country has been rocked by a succession of eye-watering corruption scandals, including that of Javier Duarte, a PRI governor who went awol in a government helicopter in 2016 after being accused of corruption and whose wife recently turned up living in luxurious exile in one of London’s poshest boroughs.

On the campaign trail, Amlo has hammered home his determination to end the bloodshed and theft that have become rampant under the PRI and the Pan, the only parties to have held Mexico’s presidency since its democratic transition in 2000. “This isn’t any old election,” he told the Ecatepec rally. “It’s a vote for more of the same, or for genuine change … It’s change, yes or change, no.”

Alan Riding, author of a seminal book on Mexican politics and society called Distant Neighbors: A Portrait of the Mexicans, described Amlo’s success as “a product of total disenchantment” with the Mexico’s ruling elite. “The PRI and the Pan have had their turn and they have failed, time and time again.”

So who is the man preparing this shake-up?

Amlo was born in the Tabasco river town of Tepetitán, in November 1953, the first of seven children. He became politically active in the late 1970s, working with local indigenous populations, and later moved to Mexico’s capital where he was elected mayor in 2000.

Friends and supporters describe Amlo as a taco-loving baseball enthusiast and bookworm who is happier with his head in a book or out enjoying nature than socializing. “He’s a monastic man,” says Azucena Cisneros, a candidate for Amlo’s party in the state of Mexico. “Marvelously disciplined but monastic. He has no social life.” He is also a friend of Jeremy Corbyn and his Mexican wife, Laura Álvarez.

And what kind of president might Amlo turn out to be?

Critics cast Amlo as a Mexican Chávez or even a Mexican Trump. Some detractors have even accused him of posing as “a tropical messiah”.

But many experts believe a better, if still imperfect comparison, might be Brazil’s former president Luiz Inácio Lula da Silva, a one-time union firebrand who was elected on his fourth attempt, in 2002. Fears over Lula’s election sent stocks tumbling and had investors in a sweat. But he ruled for two terms as a pragmatic centrist credited with slashing poverty in one of the world’s most unequal societies.

Like Lula, Amlo has tempered his discourse in what is his third bid for the presidency (he ran unsuccessfully in 2006 and 2012) and has vowed to rule for the poor. “We will care for everyone. We will listen to everyone. We will respect everyone,” he told the crowds in Ecatepec, home to nearly 790,000 of the 53 million Mexicans stuck below the poverty line.

“But we will give preference to the humble. For everyone’s wellbeing, the poor will come first.”