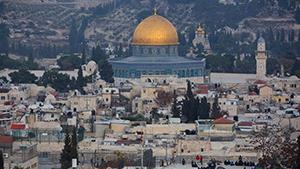 The unprecedented security measures – especially by the Jerusalem Police – have resulted in the arrest and interrogation of several senior Palestinian figures from east Jerusalem.

The Palestinian Authority and various Palestinian factions have stepped up their activities in east Jerusalem, while Israeli security authorities have intensified their operations to torpedo those efforts.

“The Jerusalem Police have been playing a cat-and-mouse game with the Palestinian Authority and other Palestinian political factions trying to operate in the city in violation of the law,” a Palestinian lawyer from east Jerusalem told The Jerusalem Post this week. “This has been going on for the past two decades. But in recent months, especially after [US President Donald] Trump’s decision to recognize Jerusalem as Israel’s capital and move the US embassy from Tel Aviv to the city, we have witnessed an escalation in this conflict.”

The unprecedented security measures – especially by the Jerusalem Police – have resulted in the arrest and interrogation of several senior Palestinian figures from east Jerusalem, as well as police raids on hotels and other public venues hosting conferences organized by various Palestinian factions including the PA.

Israel says that the Palestinians are acting in violation of the Law for the Implementation of the Agreement on the Gaza Strip and the Jericho Area – Restriction on Activity – 1994. The purpose of this law is to ensure compliance by the PLO concerning the restriction of activity by the Palestinian Authority in the Gaza Strip and Jericho in accordance with the agreement, and to prevent political, governmental or similar activity within the area of the State of Israel, including east Jerusalem.

Article 3(a) of the law states that the Palestinian Authority “shall not open or operate a representative mission, and shall not hold a meeting, in the area of the State of Israel unless written permission for this has been given by the State of Israel or by someone authorized by it to do so.”

The law authorizes the Israel Police to enter any place, remove any person, close down any location, disperse any meeting and take action necessary to stop the Palestinians from breaching the law, which entered into force on January 1, 1995.

Since then, Palestinian political activities in east Jerusalem have nearly come to a complete halt, largely due to an ongoing and relentless campaign waged by the Israel Police to enforce the law.

This campaign reached its peak in 2002, when the Israeli government ordered the closure of Orient House, the PLO’s unofficial headquarters in the east Jerusalem neighborhood of Sheikh Jarrah, and several other official institutions linked to the PA and other Palestinian political groups.

However, Trump’s decision to recognize Jerusalem as Israel’s capital and move the US Embassy to the city has prompted the Palestinians to resume their political activities in the city – a move that has forced the Israel Police to toughen its measures against the Palestinian activists.

The Palestinians claim that the strict Israeli measures are directly linked to Trump’s decisions concerning Jerusalem, and that they are aimed at “driving as many Palestinians as possible out of Jerusalem.”

“Trump’s policy on Jerusalem has given Israel a green light to crack down on the Palestinians in the city and to prevent them from carrying out any political or cultural or even sports activities there,” said Haitham Abdel Latif, an activist with the Fatah ruling faction. “Israel wants to send a message to the Palestinians and the rest of the world that Jerusalem is and will remain its eternal and undivided capital.”

In the past few weeks, the Israel Police raided a number of conferences organized by various Palestinian groups in east Jerusalem, dispersed participants and detained several Palestinian activists.

The most recent incident took place two weeks ago, when police officers raided the Ambassador Hotel, which is located only a few hundred meters away from the Israel Police National Headquarters in Sheikh Jarrah.

The raid targeted a reception organized by the Palestinian-Russian Friendship Society to celebrate Russia Day. MK Ayman Odeh, head of the Joint List, and senior PA official Nabil Shaath were among the main figures attending the reception. The head of the Russian Representative Office in Ramallah, Aganin Aidar Rashidovich, was the guest of honor.

Some of the Palestinian activists who attended the reception were summoned for interrogation by the Jerusalem Police, and one of them, writer and former prisoner Rasem Obeidat, was detained for four days.

Upon his release, Obeidat claimed that Israel was seeking to take advantage of Trump’s policy on Jerusalem to achieve “political gains.”

Israel, according to Obeidat, saw their event as harmful to its sovereignty over Jerusalem.

“Israel feared that this would pave the way for diplomatic missions to recognize east Jerusalem as an occupied city and the capital of the Palestinian state,” Obeidat said. “I see the Israeli decision to ban the reception in the context of a comprehensive Israeli scheme to impose absolute Israeli sovereignty on Jerusalem and prevent the Palestinians from carrying out any activities in the city.”

In the context of the Israeli crackdown, the Jerusalem Police earlier this week summoned for interrogation Hatem Abdel-Qader, a senior Fatah official from east Jerusalem who previously served as PA Jerusalem Affairs Minister.

Abdel-Qader was warned that the authorities would take further measures against him if he and other activists continued to operate in Jerusalem.

On at least two separate occasions in the past few weeks, the Jerusalem Police banned events in east Jerusalem in which PA Education Minister Sabri Saidam was supposed to participate. Police officers also banned a Ramadan Iftar (fast-breaking meal) that was recently organized by the Arab Chamber of Commerce in east Jerusalem to honor Palestinian journalists, because the event was reportedly funded by the PA.

In April, the authorities closed down the offices of the Elia Association for Youths, a Palestinian group affiliated with the PFLP, which were located near the Israeli Ministry of Justice on Salah Eddin Street, the main commercial center of east Jerusalem. A few days earlier, the Jerusalem Police banned an event organized by DFLP supporters in one of east Jerusalem’s hotels and briefly detained some of the organizers.

“Today, we are in a situation where you need permission from the Israeli authorities if you want to attend a dinner or a sports or cultural event in Jerusalem,” a Palestinian activist told the Post. “The Israeli measures against Palestinian activists in the city are unprecedented, and are aimed at sending a message that Israel will not tolerate any kind of activity in the city. Dozens of Palestinians have been detained or questioned by the police in the past few months in a clear attempt to deter them from carrying out political or cultural events in Jerusalem.”

Reuven Berko, who served for 10 years as Arab affairs adviser to the commander of the Jerusalem Police and was personally in charge of enforcing the law prohibiting Palestinian political activities in east Jerusalem, told the Post that he does not believe that the recent measures were linked to Trump’s decisions.

“This policy has been around since 1995, when the law went into effect,” Berko said.

“This has been a consistent policy since then and it has nothing to do with President [Donald] Trump. The Police are in charge of enforcing the law, which is aimed at preventing the Palestinian Authority and other Palestinian groups, including Hamas, from undermining Israeli sovereignty over Jerusalem.

“In the past two decades, we have seen many attempts by the Palestinians to establish governmental institutions in Jerusalem in order to create facts on the ground and challenge our sovereignty, in violation of the law,” he said.