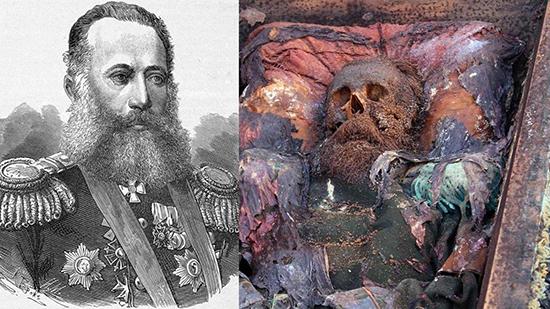 The coffin carrying the remains of Lt. Col. Karl Karlovich Rjepetsky, a member of the 78th Navaginsky regiment of the 20th infantry division of the 1st Caucasian Army Corp., had hit headlines in Turkey after it was unearthed on April 26, 2017 during excavations to lay the foundation of a construction project in Ardahan.

The grave of a 19th-century Russian soldier of Polish descent has been moved into a museum over a year after it was found in northeastern Turkey, an official said on June 28.

Efsal Alantar, Ardahan provincial director of culture and tourism, told Anadolu Agency that a team of experts had carried out the transfer process.

The body, which was in a coffin decorated with the Russian Orthodox cross, was found in the Karagol neighborhood of Ardahan — which fell to Russian troops in May 1877 — and then taken to the local museum.

Alantar said that moving the grave was the decision of the Kars Regional Council for Conservation of Cultural Heritage.

“The place of the grave — that is, the brick stones that make up the grave — was moved,” he added.

He said that the field owner where the grave was found can now proceed with his work.

Karlovich died in 1894 due to illness.