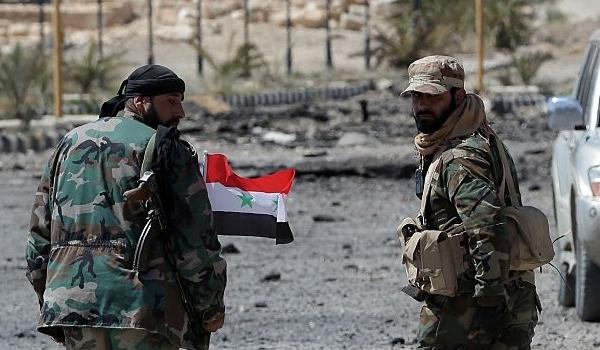 TEHRAN (FNA)- The Syrian army forces reached areas near the strategic town of al-Harak after advancing in Eastern Dara’a and winning control of several terrorist-occupied regions.

The army units continued to advance in Eastern Dara’a on Thursday, gaining control of the town of Nahetah and Sama al-Hanidat region.

Field sources reported that the army troops have advanced in regions near al-Harak in Eastern Dara’a, and said that they are now busy with cutting the terrorists’ supply lines in the region.

They added that the militants have been forced to retreat from their positions in al-Harak as the Syrian army forces are on the verge of surrounding the town.

Meantime, a field source said that the army has pounded the terrorists’ positions in Dara’a al-Balad with artillery and missile fire, adding that the army forces intend to cut the terrorists’ supply lines in Eastern and Western Dara’a by seizing control of the militants’ air defense in the South.

The Syrian army started the second phase of its large-scale anti-terrorism operation in Southeastern Dara’a on Wednesday after imposing control over the Northeastern part of the province.

The army men kicked off the second phase of their operation in Southeastern Dara’a by opening heavy fire at terrorists’ positions in al-Sawameh region, Qaraz prison and East of Refugee Camp.

In the meantime, the army’s artillery and missile units and aircraft pounded terrorists’ movements and positions in Dara’a al-Balad and the small town of al-Qariyeh Sharqi in Dara’a countryside.

Local sources said that the army has purged Northeastern Dara’a completely of terrorists.