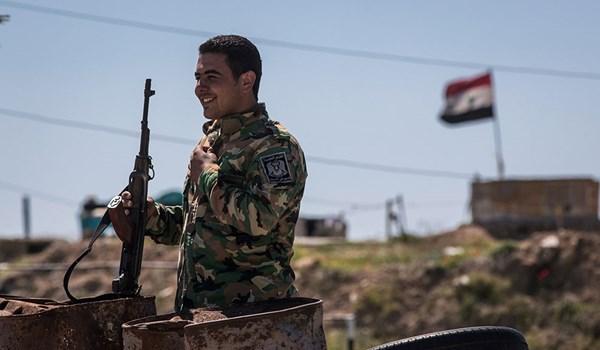 TEHRAN (FNA)- The Syrian army forces repulsed the terrorists’ offensive against their positions in Eastern Quneitra.

The army units engaged in heavy clashes with the militants on Thursday morning after the latter attacked their positions in regions near the village of Joba in Eastern Quneitra through Joba-Um Batenah road.

The army’s artillery and missile units also targeted the terrorists’ positions in the village of Um Batenah in Quneitra with precise attacks, killing a number of terrorists.

Field sources also reported that the army forces warded off the terrorists’ offensives after killing a large number of them and destroying their weapons and military equipment.

Meantime, the Syrian army troops forced other militants to flee to their positions in the village of al-Hamidiyeh in Queitra which is under occupation of Tahrir al-Sham Hay’at (the Levant Liberation Board or the Al-Nusra Front).

The Syrian army forces engaged in fierce clashes with Tahrir al-Sham militants who had attacked a number of military bases in the town of al-Ba’ath in Northern Quneitra from the village of al-Hamidiyeh on Thursday.

The army units killed and wounded a large number of militants during the clashes, destroying their weapons and military equipment.

Other terrorists fled towards al-Hamidiyeh and adjacent areas after the heavy defeat.

The army troops also pounded the terrorists’ moves in the road between the two towns of Masharah and Naba’a al-Sakhar in Quneitra, killing and wounding a number of militants.

Meantime, the terrorists targeted civilians’ houses in the village of Jaba in Northeastern Quneitra with mortar fire, killing one civilian and wounding 10 others.