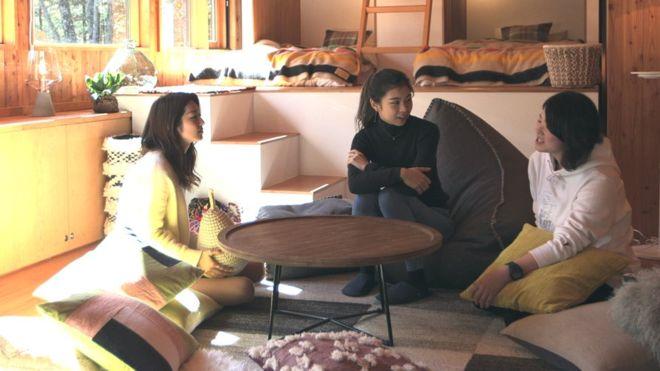 A bunch of beautiful singletons. One huge villa. Gorgeous sprawling views. And a quest to find love.

But this isn’t Love island – the tempestuous show that has the UK hooked – it’s Terrace House, the reality show which has taken over Japan.

In Terrace House, six strangers – three men and three women from different walks of life – live under the same roof while getting to know and date each other.

The contestants are polite to each other, apologise when they run into conflict and form romances at snail’s pace.

So what is it about this seemingly dull show that keeps people tuning in?

Terrace House, produced by Japanese television company Fuji and Netflix, is now in its fourth season.

The format would be recognisable to anyone who has watched a reality TV show, yet there are significant differences.

For one, its contestants, aged from teens to 30s, are allowed to go about their daily lives as they please.

They are often seen leaving the house for work, heading off to university or just popping to the supermarket. They can also walk out of the house if they no longer want to be on the show.

And although it is essentially meant to be a dating show, don’t expect to see any major Love Island-style “grafting” in this show.

The contestants do ask each other out on dates, but their conversations revolve more around their personal ambitions and expectations than finding out each other’s “type on paper”.

‘The people speak in muted tones’

In Terrace House, nothing is too mundane.

You see the girls chatting in their pyjamas, the boys cooking fish for dinner and a lot of “how has your day beens?”

The lack of drama also means the show is surprisingly relaxing to watch, almost like watching a friend go through their day-to-day life.

“I think one reason why the show might be so appealing is that we’re able to relate more to the people in the show,” said Dr Griseldis Kirsch, senior lecturer in contemporary Japanese culture at the School of Oriental and African Studios (SOAS).

“You’re able to imagine yourself in their shoes.”

The show’s setup and layout is also pleasant to look at – complete with sleek minimalist furniture.

“It’s quiet and calm on the eyes. It’s got soothing colours, the people are nice and speak in more muted tones.”

This contrasts with shows like Love Island, where splashes of neon pink, orange and shocking green shout out for your attention – even the contestants are usually dressed in bright colours. And often shouting.

“In television, you usually need to stand out to capture attention,” says Dr Kirsch. “A show like Terrace House, it’s not like that at all. The risk was that something like that might not have worked. But for this it has.”

Yuudai Arai of Terrace House: Opening New Doors – Only 19, he’s been hailed as one of the biggest show villains so far. His helplessness, lack of ambition and immaturity have been cited as just some of reasons contestants and viewers haven’t taken to him.

He mentions in the show several times that he wants a woman to take care of him and is the closest thing you’ll find to “muggy” on this show. He eventually left, saying he needed independence.

Tsubasa and Shion: Tsubasa, a hockey player, and Shion, a male model, have slowly but surely progressed to being a couple, and are firm favourites with viewers.

It took them more than 15 episodes to even come close to kissing, but fans still laud their relationship as “healthy and real”.

Yuto Handa: Nicknamed “Mr Perfect”, the 27-year-old was known to walk around the house dropping quotes of wisdom and helping others.

His work ethic, respect for others and talent as an architect has resulted in an entire Reddit fan thread being dedicated to him.

Despite the language barrier, Terrace House has also amassed a huge following internationally.

“The show is kind of like a window into Japan,” says Dr Kirsch. “It’s travelled well because of how different it is to other reality shows. Take Big Brother in the UK and in Germany, its a different language but the format is the same. This show is different.

“In the West, especially for reality TV shows we are used to very ‘in your face’ actions. But Japanese viewers pick up more on subtle actions.”

And many fans say it is precisely the subtle nature of the show that keeps them tuning in.

“Everything is so free of loud drama [that] little moments, gestures, words take on a kind of extraordinary weight,” Johnathan Newell, a Terrace House fan from Vancouver tells the BBC.

“The show becomes a game of figuring out motives and feelings rather than having them screamed at us.”

And other social media users agree.

“It’s the ‘boring’ aspect of everyday life spiced with moments of tension, romance and friendship that keeps the show relatable,” a Reddit user from the US said, speaking to the BBC.

“[The show] just feels more realistic and I really liked the idea that they are still able to live their normal lives,” added another Reddit user from Germany.

“In this [day and age] where we have hundreds of scripted reality shows, Terrace House feels like real life. You’re able to get to know some of them and start to care for their life, like a friend.”