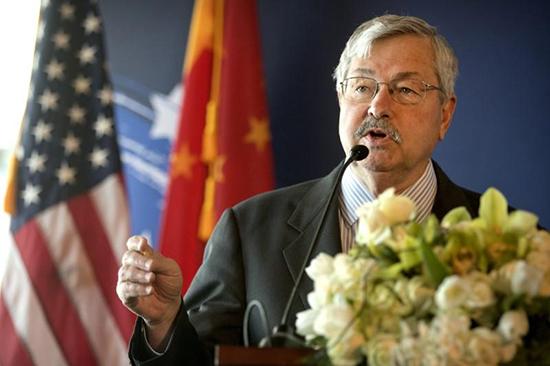 BEIJING (Reuters) – U.S. ambassador to China Terry Branstad said on Friday that the U.S. government is not convinced China is willing to make sufficient progress on trade issues, as the two countries remain locked in spiraling disputes.

Speaking at the opening of a financial forum in Beijing, Branstad said there was still a chance to address issues such as non-tariff barriers, loss of intellectual property and technology transfer.

“The administration is not convinced that the Chinese are willing to make enough progress soon enough,” Branstad said.

China unveiled on Thursday a long-anticipated easing of foreign investment curbs, including in the banking, agriculture, automotive and heavy industry sectors, as Beijing moved to show it would fulfill pledges to open its markets further.

Branstad said there is “skepticism” in the United States that China would follow through on its pledges to truly open up in areas such as financial services.

A strengthened review process by the Committee on Foreign Investments in the United States, or CFIUS, an interagency panel that checks the national security implications of transactions, is likely and also the right way to deal with investment issues, Branstad said.

U.S. President Donald Trump said on Wednesday he will use a strengthened CFIUS process to thwart Chinese acquisitions of sensitive American technologies, a softer approach than imposing China-specific investment restrictions.

The Trump administration has been divided over the scope of curbs on foreign investment deals.