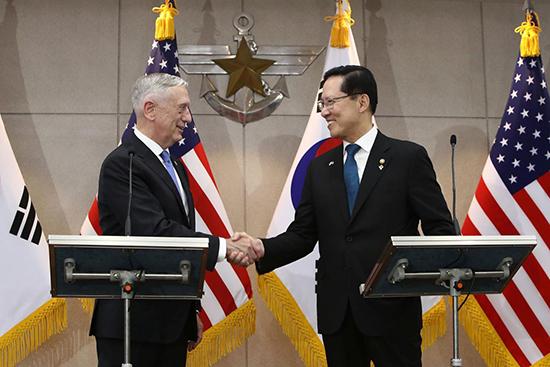 The U.S. will maintain its “current” military presence in South Korea as part of an “ironclad” commitment to the country’s security, Defense Secretary Jim Mattis said on Thursday.

“U.S. commitment to the Republic of Korea remains ironclad, and the U.S. will continue to use the full range of diplomatic and military capabilities to uphold this commitment,” the defense secretary said, Reuters reported. He also added that this commitment includes “maintaining the current U.S. force levels on the Korean peninsula.” Currently, the U.S. has about 28,500 troops stationed in South Korea.

The comments from Mattis come after Trump’s decision, following the historic June 12 Singapore summit with North Korean leader Kim Jong Un, to cancel war games with South Korea, a move critics have called an unnecessary concession to Pyongyang. Prior to the summit, The New York Times reported in early May that Trump had asked the Pentagon to consider reducing U.S. troops on the Korean Peninsula. However, national security adviser John Bolton quickly denied the reports.

Defending the cancellation of joint military exercises with South Korea, Mattis said the move would create “increased opportunity for our diplomats to negotiate, increasing prospects for a peaceful solution on the Korean Peninsula,” Reuters reported. The secretary also insisted that U.S. and South Korean forces “remain united, vigilant and ready to defend against any challenge.”

Trump’s decision to cancel the war games came as a surprise to military leaders. Following the announcement by the president on June 11, U.S. Forces in Korea spokeswoman Lieutenant Colonel Jennifer Lovett said the military leaders “had received no updated guidance on execution or cessation of training exercises.” The Pentagon later announced on June 22 that war games were being “indefinitely suspended” as the president had promised.

Many have criticized the decision, including leading GOP Senator John McCain, from Arizona.

The legislator released a statement in mid-June, saying the decision is a “mistake” and that “unnecessary and unreciprocated concessions [are] not in our interests.” McCain added, “We must not impose upon ourselves the burden of providing so-called ‘good faith’ concessions as the price for continued dialogue.”

For its part, Seoul has publicly supported the move. “We consider the ongoing denuclearization negotiations with North Korea as crucial, so as long as those negotiations continue, the decision by the governments of South Korea and the United States will be maintained,” a South Korean government spokeswoman said.

South Korean President Moon Jae-in has been a strong supporter of dialogue and taking the diplomatic route toward peace with his country’s neighbor. At the Singapore Summit, North Korea’s Kim pledged to commit fully to the denuclearization of the Korean Peninsula. However, experts and satellite images have raised questions as to whether Pyongyang will actually follow through on the promise.