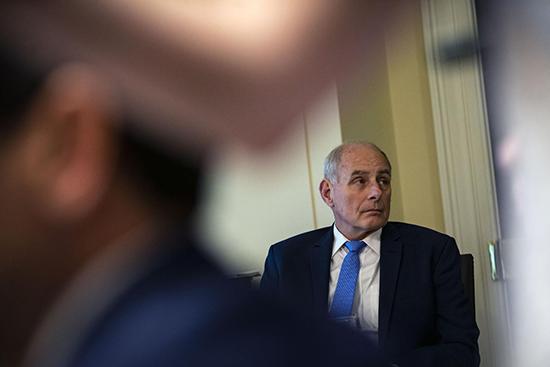 White House Chief of Staff John Kelly could reportedly end his tumultuous time in President Donald Trump’s administration as soon as next week or later this summer.

Kelly, a former general and head of Homeland Security before taking his current job a year ago, often clashed with Trump after being charged with bringing order to a White House that was often in disarray due to the president’s shoot-from-the-hip style.

The report stressed that an exact time for Kelly’s potential exit had not been nailed down, but the Massachusetts native could go by next week or after Trump attends the NATO summit in Europe next month.

Kelly took over for former Republican National Committee chairman Reince Priebus nearly a year ago after Trump struggled to maintain order in the White House six months into his first term.

It was believed Kelly’s illustrious and disciplined military background could bring such order, but several reports over the last year have indicated a strained relationship between the president and his chief of staff. In particular, Kelly reportedly oversaw the dismissals of controversial administration figures like Anthony Scaramucci, Omarosa Manigault and Trump’s former bodyguard Keith Schiller.

Mulvaney has served a dual role within the administration, a sign he could handle the rigors of such a difficult job as White House chief of staff. He took over as acting director of the Consumer Financial Protection Bureau late last year and dismissed the financial watchdog’s 25 members earlier this month.

Before heading to the White House, the 50-year-old Mulvaney represented South Carolina’s 5th Congressional District, after rising up in the state’s congress.

Ayers has been a key aide to Pence and reportedly has helped the vice president serve as the Republicans’ main strategist and campaigner ahead of the fall’s all-important primaries, according to Politico’s Power List. The 35-year-old also previously headed up the Republican Governors Association.

Should Kelly leave, the high-profile exit would be only one of many. The administration has already shot down a report earlier this month of press secretary Sarah Huckabee Sanders planning to leave in the near future, while Trump also said goodbye to close aide and communications director Hope Hicks in March.