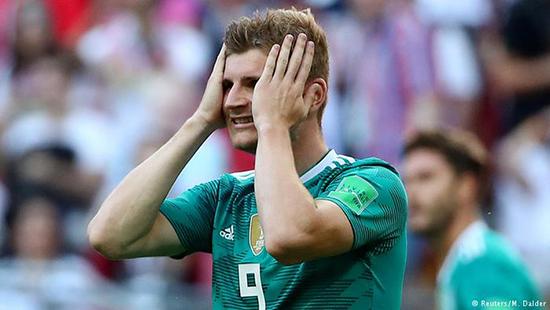 After the exit comes the autopsy, but after that Germany must look forward. Amid the darkness of the World Cup failure there is light at the end of the tunnel, in the shape of the next generation of players.

As Germany’s squad touched back down in Frankfurt on Thursday, they were faced with the sober reality that their failures were being brutally dissected both at home and abroad.

Joachim Löw has a contract until 2022 but it would be no surprise were he to announce his resignation in the coming days. The feeling of the end of an era is hard to escape and it also seems entirely possible that a number of his trusted lieutenants will depart the international stage, or at least have to make do with a demotion from their leading roles.

But unlike their last group stage exit in a major tournament at Euro 2004, a major revamp of the footballing setup seems unneccessary. The 2017 victories at the Confederations Cup and under-21 Euros suggest that, once the dust has settled, the failure in Russia may be regarded as a one off. DW takes a look at those who look set to take a step forward with the national team.

Löw named the oldest German World Cup side since the 2002 final in their opener against Mexico but this was not a squad without youth. Timo Werner, Niklas Süle, Julian Brandt (all 22) and Joshua Kimmich and Leon Goretzka (both 23) all featured in the loss to South Korea and are all regular starters at Bundesliga clubs competing in Europe — though how much game time Goretzka gets when he moves to Bayern Munich remains to be seen.

Werner struggled in front of goal in Russia, while Kimmich — though good going forward  showed he still has work to do on the back foot but Brandt and Süle impressed in their limited game time. Löw clearly has some trust in this group and it seems unthinkable his successor, should there be a need for one, wouldn’t feel similarly. The spine of a new side has already started to form.

Before the tournament, much was made of the players Germany could afford to leave behind, chief among them Manchester City’s Leroy Sane (pictured, top), one of four players cut from the initial 27 man squad. The shambolic display from those above them in the pecking order does nothing to dispel the claims that Germany’s strength in depth is almost peerless.

In addition to Sane, who won the Young Player of the Year award in England, Bayern Munich’s Serge Gnabry missed out through injury after an excellent season on loan at Hoffenheim and already has an international hat-trick while Kerem Demirbay also improved under Julian Nagelsmann. At Leverkusen, versatile fullback Benjamin Henrichs’ steady progress and Confederations Cup experience make him an intriguing option ahead of the Euro 2020 qualifiers, which begin next March.

The Bundesliga’s young talent track is long established and the next two wünderkinder off the rank appear to be Bayer Leverkusen’s Kai Havertz (19) and Jann-Fiete Arp (18), of Hamburg. Havertz in particular looks ready to make the step up, if not immediately then certainly in advance of Euro 2020. The talented, creative midfielder bears some of the hallmarks of Mesut Özil’s game with a more robust edge and has already racked up 54 Bundesliga appearances, notching three goals and nine assists in 2017-18.

Arp, who scored seven goals at the under-17 World Cup in 2017, made his Bundesliga debut last September as a late substitute before scoring in his next substitute appearance and his first start. The goals dried up after that as Hamburg dropped to the second division, where Arp will surely play regularly. HSV’s relegation could yet have a silver lining, as could Germany’s World Cup exit.