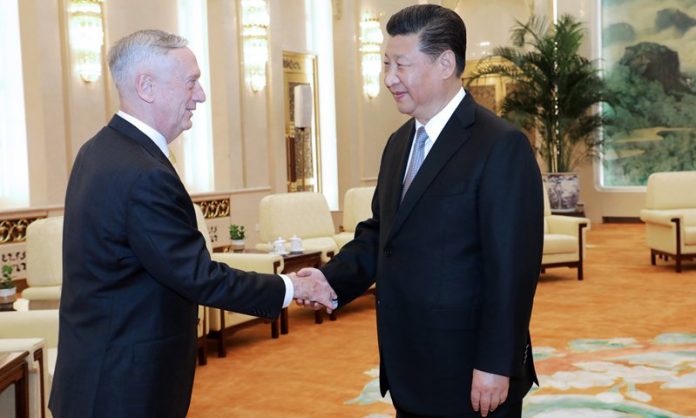 Chinese President Xi Jinping met with visiting US Defense Secretary James Mattis on Wednesday at the Great Hall of the People in Beijing, with experts saying that China has delivered a clear message to the US that its legitimate activities in the South China Sea and Taiwan Straits won’t be affected by any US move.

During the meeting with Mattis, Xi made China’s stance clear and firm on issues affecting its sovereignty and territorial integrity.

Xi said that we can’t lose even one inch of the territory inherited from our forefathers, and China won’t take anything that belongs to others, China Central Television (CCTV) reported on Wednesday.

“There are some issues concerning China’s sovereignty and territorial integrity which have become increasingly tense because of US moves,” such as South China Sea issues and the Taiwan question. “So, through the meeting, China is sending a warning to the US by reaffirming its bottom line,” Diao Daming, an American studies expert and associate professor at the Renmin University of China, told the Global Times.

Mattis has heard the most authoritative voice from China on these issues and questions, and this might indicate that China’s legitimate activities in regions like the South China Sea and the Taiwan Straits won’t be affected by military actions from the US, said Xu Guangyu, a retired PLA major general and senior adviser to the China Arms Control and Disarmament Association.

Mattis thanked Xi for meeting him and said that the US highly values the military-to-military ties with China, and the US is willing to strengthen strategic communication, expand win-win cooperation, control and manage differences and risks, and avoid conflict and confrontation with China, CCTV reported.

During the talks, Wei said that Mattis’ visit will help facilitate healthy interactions and relations between the two militaries. Mattis also invited Wei Fenghe to visit the US at an appropriate time.

“The visit took place after the US showed its tough position to China by withdrawing its invitation to the Rim of the Pacific exercise (RIMPAC), so it shows that the Trump administration is pretty wise on managing tensions with China. They knew that if the communication channels between China and the US don’t function, the risk would be too high,” Xu said.

The Pentagon disinvited China from participating in the RIMPAC on May 23, in response to the alleged “militarization of islands in the South China Sea,” Reuters reported.

Wei said at the meeting that China insists its peaceful development and Chinese military will firmly safeguard the country’s national sovereignty and security and development interests.

“China and the US can develop together only when they both agree on no conflicts, no confrontations, mutual respect and win-win cooperation,” Wei said.

Wei also highlighted China’s stance on and concerns over the Taiwan question, South China Sea issues and the Korean Peninsula nuclear issue to his US counterpart.

Mattis will also visit South Korea and Japan, according to the US Defense Department’s website. This is Mattis’ first visit to China as Pentagon chief, and also the first visit to Beijing by a US Defense Secretary since 2014.