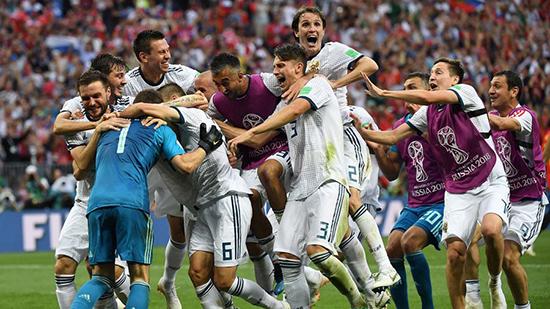 World Cup hosts Russia caused a huge upset as they beat Spain on penalties to move into the quarter-finals of the tournament.

Veteran goalkeeper and captain Igor Akinfeev was the hero as he saved two penalties, from Koke and Iago Aspas, as Russia held their nerve to win the shootout 4-3.

The teams couldn’t be separated at 1-1 after extra time, even though Spain dominated the game from start to finish – going ahead with a 12th-minute own goal from Sergei Ignashevich as it was all one-way traffic.

Although they dominated possession, Spain were not carving out chances against a well-organised Russian defence, and the hosts got back into the game when Gerard Pique stupidly gave away a penalty for handball.

Artem Dzyuba slotted home the penalty four minutes before the break and that gave Russia something to hang on to, which they did with dogged determination against a Spain team who were bitterly disappointing with a lack of urgency and cutting edge.

It was not pretty as Russia sat back but Spain could not even work Akinfeev and their best chance came at the end of extra time as Spain’s players were baying for VAR after more grappling in the box.

Russia got away with it despite a VAR review. The noise that erupted when the referee finally waved played on was immense but was capped by the roar that greeted the final whistle and penalties.

Iniesta stepped up first and scored, Smolov replied but David De Gea got a fingertip to it. Pique scored his and Ignashevich, who was superb after his own goal, coolly replied.

Akinfeev then saved Koke’s effort, before Golovin, Ramos and Cheryshev scored theirs, meaning Aspas had to score. He did not and Russia went wild.

Russia, the lowest ranked team in the tournament, now move on to the quarer-finals.