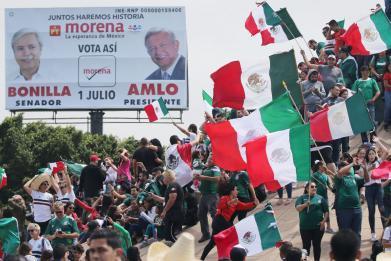 Obrador, who portrayed himself as an agent of change during his campaign, secured over 53 percent of the ballots in the presidential election, announced Mexico’s electoral commission on Monday.

The 64-year-old president-elect, known by his initials AMLO, told a Mexican broadcaster that he was “very pleased that the people gave me their support, their endorsement. We thank all of the people of Mexico.”

Obrador also called for reconciliation after a polarizing campaign and promised “profound change” but with respect for the law and constitutional order.

He vowed to tackle the “evil” of corruption, saying it had caused social inequality and violence in the country.

One of the core promises of his campaign was to stand up against US President Donald Trump’s “aggressive bullying tactics.”

He said that he would not allow Mexico to be Trump’s “whipping boy,” but added that he wants “friendship” and “mutual respect” in ties with Washington, and that he would seek to avoid any trade war.

Trump congratulated the president-elect on his victory, saying he looks “very much forward to working” with him.

“There is much to be done that will benefit both the United States and Mexico!” the president said in a Twitter message.

AMLO is inheriting tense bilateral ties with the US, which have plunged to a historic low over Trump’s anti-immigration policies as well as his anti-trade stance.

During his presidential campaign, Trump had taken a hard stance against Mexican immigrants, repeatedly accusing them of being “criminals” and “rapists.”

In a highly controversial move, the Trump administration has been separating children of migrant families from parents at the US border. Some 2,000 children remain separated from their migrant parents.

As soon as taking office in January 2017, Trump ordered the building of a wall along the US-Mexico border. He even said Mexico was “going to pay for the wall.” Mexico’s outgoing President Enrique Peña Nieto, however, rejected his remarks, saying the country will never pay for it, “not now, not ever.”

Not long after Trump’s inauguration, AMLO published a book entitled “Oye Trump,” or “Listen Trump” in English, in which he criticized the US president’s plans for a border wall.

“Trump and his advisers speak of the Mexicans the way Hitler and the Nazis referred to the Jews, just before undertaking the infamous persecution and the abominable extermination,” he wrote in the book.

The president-elect also wants the North American Free Trade Agreement (NAFTA) to stay alive in the face of Trump’s threats, vowing to cut Mexico’s economic dependence on foreign powers and to put Trump “in his place.”

Trump has threatened to kill NAFTA if it is not changed in favor of better terms for US workers and companies. The agreement signed by Canada, Mexico and the US has created a trilateral trade bloc in North America.