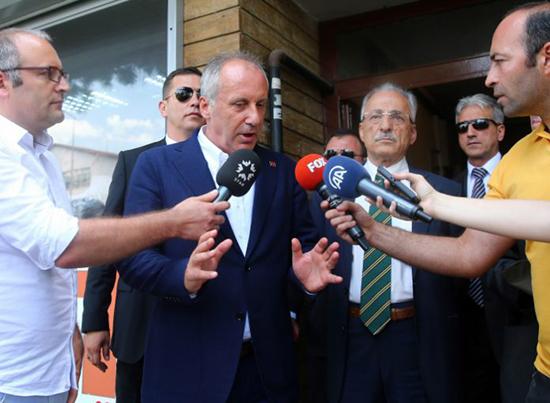 Republican People’s Party’s (CHP) presidential candidate Muharrem İnce in response to intra-party debates has said he would not run against CHP leader Kemal Kılıçdaroğlu for party chairmanship, adding that he would continue his mission to become the “president of 81 million people,” the Hürriyet Daily News reported on Sunday.

“I will not run against [Kılıçdaroğlu] and be his competitor. I would not commit such disloyalty to a person who put me forward as a presidential candidate,” İnce said on Sunday, as intra-party debates became a center of attention within the CHP following the June 24 elections.

Turkey’s main opposition party received 22 percent of the vote, and their presidential candidate garnered 30 percent in the recent elections, which has sparked criticism of the current administration, leading some members and supporters to ask for the resignation of the CHP leader.

Since İnce had run a candidate for leadership against Kılıçdaroğlu in two previous congresses, it was rumored he would push for an extraordinary congress and transform his energetic presidential campaign into a leadership post in the CHP.

İnce and Kılıçdaroğlu have both responded to rumors over the tension between the two, with İnce saying on June 27 he would not ask for a congress.

“İnce is an asset for the CHP,” Kılıçdaroğlu said the same day.

I will not ask for a congress. I would never make such a demand. However, if the CHP were to invite me to such a post and he [Kılıçdaroğlu] were to say, ‘I will resign,’ then I am ready,” said İnce, reiterating his position on Sunday.

He said he appreciated that Kılıçdaroğlu had put him forward as a presidential candidate.

“It is not something everyone can do,” said İnce.

İnce said he would continue his mission to become the “president of 81 million people.”

“I do not want a seat in the party, I want to rule Turkey,” he said.

“I don’t think the results of this election will last five years,” added İnce.

Denying claims that he would form a new political party, he reiterated his earlier promise to visit all 81of Turkey’s provinces.

İnce said mistakes were made during the campaign but that he would stick to his motto of becoming “everyone’s president.”

“I will continue with the slogan, ‘I am everyone’s president.’ You will see that I will be successful. I will not leave it here, I stand behind my promise. As long as health permits, I will be a presidential candidate again,” he said.