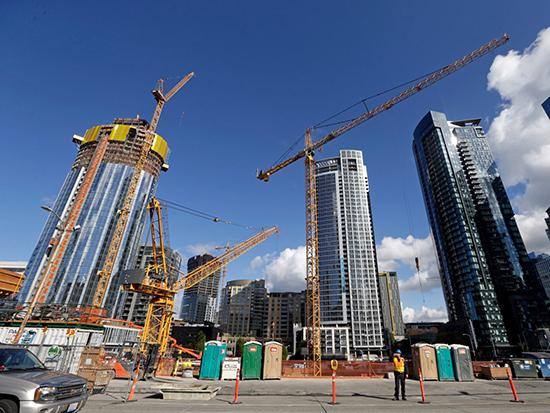 To lure Amazon, it seems cities will do anything — even improve their infrastructure.

Cities are approving projects to try and beef up public transit, enrich education, and make housing more accessible, all make themselves more attractive to the tech giant.

Cities often make lofty promises with the hope of becoming the home base for a company. But experts say with Amazon and its promise of 50,000 jobs and $5 billion in local investment, it’s different.

“I’m not sure we’ve ever seen it on the same scale as the Amazon HQ2 search,” Sean Slone, who helps craft transportation and infrastructure policy at the Council of State Governments, told USA Today.

Amazon specifically identified its needs for its HQ2 potential site, and two of the biggest are education and transit. It’s in these areas cities seem to be focusing.

In May, Atlanta, an HQ2 contender, consolidated its public transit into the Atlanta-region Transit Link Authority. Earlier this year, Georgia announced plans to spend $100 million and build a bus rapid transit corridor along a busy Atlanta street. The city included the project in its pitch to Amazon, according to the Atlanta Journal-Constitution.

In Washington, DC, widely considered a frontrunner for HQ2, earlier this year, the three area governments together agreed to infuse the ailing Washington Metropolitan Area Transit Authority. DC proper, Virginia, and Maryland each agreed to provide a combined $500 million a year to fund the turnaround of the Metro rapid transit system, which runs through each state, the Washington Post reported.

Detroit is now pushing a ballot measure for a regional transportation system that would connect the city and its regional suburbs after its bid for HQ2 failed due to lack of transportation, according to the Wall Street Journal.

A rendering from DC’s HQ2 proposal. DC Government Other states are taking a look at their workforce, and realizing they need to change the way they approach education to attract big fish like Amazon.

Kansas City, which didn’t make the shortlist, is making efforts to overhaul its computer science courses and train new teachers.

“You can draw a loose line between Amazon and the legislation that just passed,” Ryan Weber, leader of the KC Tech Council, a local group that advocates for tech education, told USA Today. “I think it was made a priority because of the Amazon response.”

Cities like Cincinnati and Sacramento, also failed HQ2 cities, are now putting their tech job programs into overdrive as they try to beef up tech talent with apprenticeships and student-focused programs.

Amazon isn’t the only company cities are going after, especially one that Amazon is no longer considering. But the HQ2 contest is being seen as a wake up call for cities around the country, as they look at why their bids failed and see changes they need to make in order to compete, according to the Wall Street Journal.