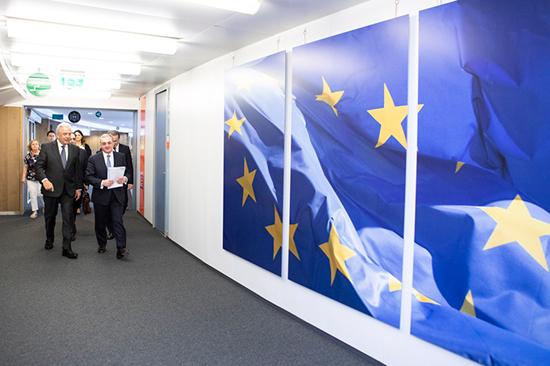 That was the message brought to Brussels, the EU capital, by its new foreign minister, Zohrab Mnatsakanyan, last week for anyone who might have thought that recent events heralded another geopolitical shift in Russia’s backyard.

The so-called ‘Velvet Revolution’ in May peacefully brought down a corrupt regime.

It recalled the ‘colour revolutions’ that swept through the region in Georgia, Moldova, and Ukraine between 2003 and 2009, opening cracks in Russia’s sphere of influence.

It also recalled the Maidan revolution in Ukraine in 2014 – a peaceful protest against a corrupt regime, but one which ended in bloodshed and triggered a confrontation between Russia and the West.

The Armenian movement embraced the same values – rule of law and democracy – which Ukrainian protesters symbolised by waving EU flags after the regime rejected an EU alliance under Russian duress.

There were no EU flags on the streets of Yerevan in May, however. There was also no revolution back in 2013 when Armenia, like Ukraine, rejected closer EU ties.

The big difference, for Mnatsakanyan, was what he called Armenia’s “security architecture”.

The other difference was the lesson of Georgia and Ukraine, when neither the EU or Nato lifted a finger to help after Russia stirred up conflict to keep them down.

“Look at Azerbaijan. Look at Turkey. We’re a country that has been blockaded for 27 years by these two states, a country which has existential security threats … We can’t afford a security vacuum for ten minutes,” Mnatsakanyan told EUobserver in an interview after his EU visit, referring to Armenia’s old conflict with Azerbaijan and its ally Turkey.

“Russia today is playing the role which provides hard security [for Armenia]. Is there anyone else standing there ready to help?,” he said.

“Look at the countries who are trying to become Nato members [Georgia and Ukraine]. How long have they been in the queue? Ten years, is it? We can’t afford 10 minutes,” he said.

Armenia is at war with Azerbaijan over Nagorno-Karabakh, an ethnic Armenian enclave which broke away in the 1990s.

There is frequent exchange of fire on the contact line and Azerbaijan’s weapons could devastate Yerevan as well as Stepanakert, the Nagorno-Karabakh capital, if things escalated.

The presence of 3,000 Russian soldiers, and dozens of tanks, artillery pieces, and fighter jets at Russia’s military base in Armenia have helped to stop that from happening.

The way the West has cosied up to Azerbaijan’s authoritarian regime for its oil and gas also showed that realpolitik governed EU actions more than it cared to admit, Mnatsakanyan said.

“National interests drive the vision of every government … the EU very much values relations driven by its energy interests,” the minister said.

That understanding of harsh reality was visible on the streets of Yerevan in May, when Armenian people “of all classes” displayed “political literacy” as well as moral outrage, he added.

“Which flags did you see in the streets? Only the [Armenian] tricolour – because that’s what it was all about … it was a strictly domestic affair,” he said.

The revolution was more than cosmetic, he said.

The new authorities have not gone after Serzh Sargsyan, Armenia’s former leader and the revolution’s bogeyman, or members of his cabinet.

But they have arrested two of his top men, former general and MP Manvel Grigorian, and former security chief Vachagan Ghazarian, who had hoarded ill-gotten gains.

Asked by EUobserver if Sargsyan was too big to go to jail, Mnatsakanyan said “the question of a [political] vendetta has been ruled out in any way”, but he added that no one was above the law.

“Look at Mr Grigorian – he had been considered untouchable,” Mnatsakanyan said.

The anti-corruption wave continues to swell, with activists now targeting Taron Makarian, the mayor of Yerevan.

But Armenia remains locked into the Eurasian Union, a Russia-led trade bloc espoused by Sargsyan, which resembles Soviet-era structures designed to keep Moscow’s vassals in their place.

It also signed a Comprehensive and Enhanced Partnership Agreement (Cepa) with the EU in 2017.

But Cepa is an empty husk compared to the EU-Ukraine trade treaty, which aligns Ukraine with the EU single market and offers billions in aid, on a model which had been pledged to Armenia before Sargsyan’s 2013 U-turn.

Mnatsakanyan, who went to Moscow before he went to Brussels in June, claimed that Armenia “does have an independent foreign policy”.

He defended the Eurasian Union and had little to say on Cepa, however.

“There’s a tendency to look at it [the Russian bloc] as something dysfunctional, something bad, but it’s an opportunity. We’re members and we’re benefitting from it,” he said.

He became animated when EUobserver asked what Russia might do if Yerevan quit the Eurasian bloc in favour of closer European ties.

“What happened in Armenia [the Velvet Revolution] – was it democratic enough for you? Was it good enough? Or does it have to be anti-Russian for it to qualify as democratic?”, he said.

With Russian aggression in Ukraine now threatening wider European security, he indicated that EU officials were also less than keen to upset the status quo.

“Are we going to sit down [with top EU officials] and hear them say: ‘Are you with Russia or not?’ – that conversation will never happen,” he said after his EU visit.