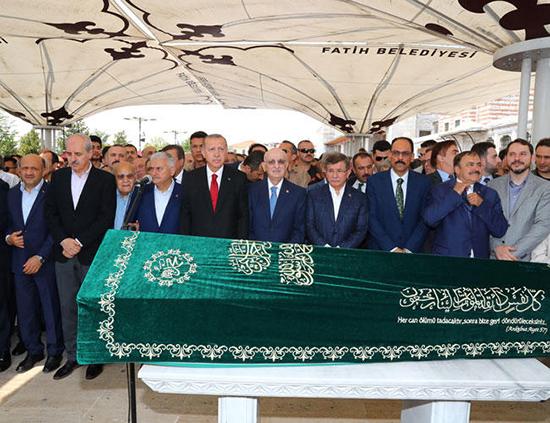 Prominent Turkish historian Fuat Sezgin, who passed away at the age of 95 on June 30, was laid to rest in Istanbul on July 1.

Macit Çetinkaya, chair of the board of the Research Foundation for the History of Science in Islam, told state-run Anadolu Agency that Sezgin died in the hospital where he was treated for an unspecified illness.

“I am very saddened by the death of such a valued scientist, regardless of his age. He was a very distinguished scientist,” Çetinkaya said.

“He donated a priceless library and museum to Turkey,” he added.

President Recep Tayyip Erdoğan also extended his condolences on the death of the historian.

“I wish Allah’s mercy upon the great scholar Prof. Dr. Fuat Sezgin, who led the awakening of our civilization and history with the works he has done in the field of Islamic science history, and offer my condolences to the nation, his relatives and the world of science,” Erdoğan said on Twitter.

Stating that all of Sezgin’s works will be brought to Turkey from other countries, “The foundation has been following this issue closely. When they are brought to the museum and the library will be much stronger,” Erdoğan said.

Sezgin had led the establishment of the Islamic Science and Technology Museum in Istanbul in 2008.

He was born in eastern Bitlis province in 1924. He studied at Istanbul University’s Faculty of Letters, where he also earned his PhD on Arabic language and literature.

He continued his studies at Germany’s Frankfurt University in 1960 following a military coup in Turkey.

He devoted a considerable amount of time to studying and listing scientific contributions made by Muslim/Arabic scholars throughout history. He wrote several books and articles.

In 2013, he also founded the History of Science in Islam Institute at Fatih Sultan Mehmet Vakif University in Istanbul.