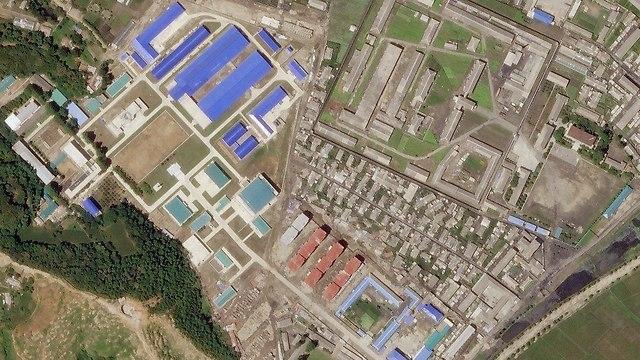 New satellite imagery published by the Wall Street Journal indicates Pyongyang is completing a major expansion of a facility that makes ballistic missiles capable of striking US military installations in Asia with a nuclear weapon; images show plant’s exterior was completed around the time North Korean leader Kim Jong-un met with US President Donald Trump in Singapore.

The Wall Street Journal published new satellite imagery Sunday night indicating that North Korea is completing a major expansion of its key missile-manufacturing plant in the city of Hamhung.

According to the report, the images analyzed by the Middlebury Institute of International Studies at Monterey, California, show that Pyongyang was finishing construction on the exterior of the plant at around the time North Korean leader Kim Jong Un met with South Korean President Moon Jae-in on April 27 and with US President Donald Trump in Singapore on June 12.

In August, the WSJ said, Kim visited the missile plant, the Chemical Material Institute in Hamhung, and ordered it to produce more solid-fuel rocket engines and rocket warhead tips.

According to a series of satellite images, new building didn’t appear to begin in earnest until April this year, around the time he shook hands with Moon in a landmark summit meeting at the inter-Korean border. The bulk of construction took place in May and June.

According to the WSJ, the facility makes solid-fuel ballistic missiles which would be able to strike US military installations in Asia with a nuclear weapon with little warning, as well as re-entry vehicles for warheads that Pyongyang might use on longer-range missiles able to hit the continental US.

Satellite imagery released last week show that North Korea is making rapid and significant improvements to the infrastructure at the Yongbyon Nuclear Scientific Research Center, despite promises made two weeks ago at the Singapore Summit to denuclearize the Korean peninsula.

Last week, NBC News quoted US officials as saying American intelligence agencies believe North Korea has increased production of fuel for nuclear weapons at multiple secret sites in recent months and may try to hide these while seeking concessions in nuclear talks with the United States.

In a report on Friday, the network said w

hat it described as the latest US intelligence assessment appeared to go counter to sentiments expressed by President Donald Trump, who tweeted after an unprecedented June 12 summit with North Korean leader Kim Jong Un that “there is no longer a nuclear threat from North Korea.”