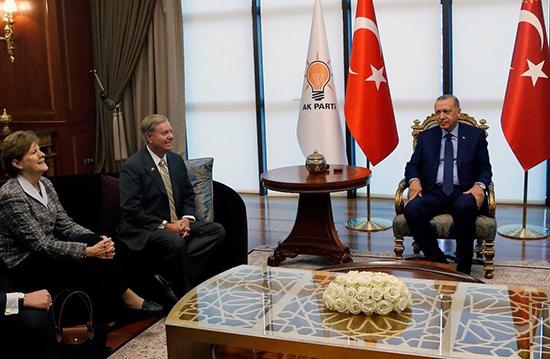 Two senior members of the United States’ Senate, Lindsey Graham and Jeanne Shaheen, have paid a previously undisclosed trip to the Turkish capital to meet President Recep Tayyip Erdoğan in a direct appeal for the release of U.S. national Pastor Andrew Brunsonwho has been in prison for more than 20 months on terror charges.

Shaheen, a Democrat senator from New Hampshire and a member of the Senate Foreign Relations and Armed Services committees, is the most vocal member of the U.S. Senate for sanctioning Turkey over the detention of Pastor Brunson. One of her congressional actions includes imposing a ban on the delivery of the F-35 aircrafts to Turkey.

Shaheen and Graham, a Republican from South Carolina, also visited Pastor Brunson in prison in the Aliağa district of İzmir before they were received by Erdoğan late June 29.

“Pastor Brunson has been unjustly imprisoned and kept away from his family for well over one year. The opportunity to see him and his wife, Norine, and to appeal directly to President Erdoğan were my main objectives on this trip,” Shaheen said, according to a story posted on the website of the New Hampshire Union Leader over the weekend.

“Any time an American is wrongfully detained anywhere by a foreign government, it is our country’s duty to do everything we can to bring him or her home,” she added.

“I am confident that the Turkish President understands this, and I appreciated the opportunity to raise my concerns. The U.S.-Turkey relationship is of strategic importance to both countries,” the democrat senator also said.

Brunson, who has lived in Turkey for 23 years, was serving as pastor of the İzmir Resurrection Church when he was arrested in October 2016. Prosecutors accuse him of having links with both the Fethullahist Terror Organization (FETÖ) and the outlawed Kurdistan Workers’ Party (PKK) and demand 35 years in jail for him.

The pastor denies all the allegations. His next hearing will take place on July 18.

Turkey and the U.S. have established a working group to work on some consular and legal affairs that include Brunson’s case as well as Turkey’s extradition request for Fethullah Gülen, believed to be the mastermind of the July 2016 failed coup and the leader of FETÖ. The group will be convened on July 13 in the Turkish capital.

The visit of the senators comes days after Erdoğan secured another five years in power through the June 24 polls and 10 days before his scheduled meeting with United States President Donald Trump on the margins of a NATO summit in Brussels.

There was no statement from the Turkish presidency after the meeting.