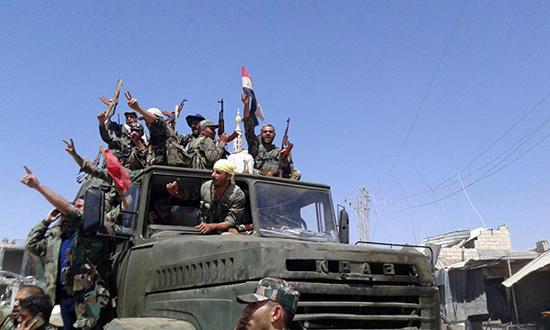 A high-profile Syrian opposition leader has condemned the U.S. for allowing the Syrian military and its allies embark on a sweeping campaign to retake the southwest, one of the last rebel-held regions in the country.

Nasr al-Hariri, the secretary-general of the National Coalition for Syrian Revolutionary and Opposition Forces, told reporters Thursday in the Saudi capital of Riyadh that it was “shameful” for the U.S. not to act as a ceasefire brokered last year between Syrian President Bashar al-Assad’s top military ally Russia and opposition supporters the U.S. and Jordan collapsed, the Associated Press reported. The deal would preclude violence between Syria’s armed forces and insurgents, but a new offensive has already seen Syrian troops make lightning gains across southern towns and villages.

Hariri further speculated that such “U.S. silence” as airstrikes bombarded rebel territory could only be part of a “malicious deal” brokered between the many international powers involved in Syria’s seven-year civil war, according to Reuters.

The U.S. became involved in the Syrian conflict as a major covert supporter of rebels that took up arms in the wake of a 2011 uprising that was also backed by Turkey and Gulf Arab states such as Qatar and Saudi Arabia. This assistance dwindled with the rise of jihadi movements such as the Islamic State militant group (ISIS), which formed out of a deadly Sunni Muslim insurgency in post-U.S. invasion Iraq and spread to Syria in 2013.

As the U.S. focused on bombing ISIS and backing Kurdish fighters facing the jihadis on the ground, Russia entered the conflict to help Assad reclaim major cities from ISIS and various insurgent groups. Many of Syria’s embattled opposition factions have since been forced to reconcile with the government or be expelled elsewhere, usually to the northwest rebel bastion of Idlib, which is dominated by the jihadi Tahrir al-Sham coalition.

The Syrian military’s southwest push was widely expected following its victories across the capital Damascus, but the anticipated campaign stoked fears of a potential escalation between Israel, which occupies the nearby Golan Heights, and its archfoe Iran, which has sent troops and mobilized Shiite Muslim militias in support of Assad. Reports have suggested that Russia, the U.S. and Jordan struck a deal that would see Iran and its local assets stay behind in exchange for assurances of no interventions from Israel and the U.S.

In a statement published Saturday by Reuters, the U.S. warned rebels in the south that “you should not base your decisions on the assumption or expectation of a military intervention by us.” The message added: “We in the United States government understand the difficult conditions you are facing and still advise the Russians and the Syrian regime not to undertake a military measure that violates the zone.”

Despite the alleged arrangement, Hariri claimed during Thursday’s press conference to have “evidence that Iran is participating in the battle” for Daraa, according to Russia’s state-run Sputnik News. He alleged that there were fighters of the rebel Free Syrian Army being held by the Lebanese Shiite Muslim Hezbollah movement, a powerful Iran-backed paramilitary group that has engaged in major clashes and wars with Israel.

The Russian Defense Ministry has denied widespread reports that it ended the ceasefire agreement in southwest Syria, even as activists reported Russian warplanes aiding the Syrian air force and troops to storm the region. Dubai-based outlet Al-Hadath reported Thursday that a 12-hour truce was reached between Russia and Syrian opposition sources.