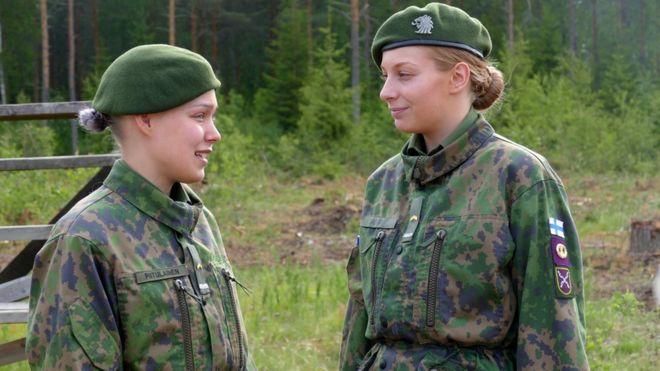 “I decided long ago I would do military service,” says Saara Piitulainen, a 22-year-old voluntary servicewoman. “My father was a peacekeeper, and that is what I want to do myself.”

She has come to the right place. The Huovinrinne garrison in Sakyla in western Finland is where Finnish peacekeeping forces train before they leave for crisis areas around the world. Now she is training to be a non-commissioned officer.

Finnish women have been doing voluntary military service since before Saara Piitulainen was born and this year a record 1,500 applied. In a few days’ time she will be promoted to corporal.

But for the first time since the military was opened up to women in 1995, the idea has been floated of temporarily excluding them as a way of cutting costs.

“We have to find savings somewhere,” said Defence Minister Jussi Niinisto. A couple of days later, after a heated debate, he rejected the idea and said he didn’t even back it himself.

Should women serve and if so how?

But his short-lived proposal has shone a light on the separate roles of men and women, in a country where men have to serve up to a year of military or civilian (community) service from the age of 18 while women can choose.

Finns are now asking if voluntary service is good for women and whether or not it is the right model for their armed forces.

“One of the best things about women in the forces is their strong motivation,” says Alexiana Gaudiat, 21. “I think also that female leaders in the army are very capable”.

Alexiana Gaudiat is in the same group as Saara Piitulainen and both are opposed to the defence minister’s recent idea of excluding women from the army.

“I had leadership training in mind when I came to the army,” says Alexiana Gaudiat.

Both women are restaurant chefs in their civilian lives. Working under pressure and discipline are required in both fields.

“There is a tough hierarchy in the restaurant world, so I knew how it might be in the army,” says Saara Piitulainen.

Five facts about women in the Finnish military

As elsewhere, in Finland the #MeToo campaign has exposed an undercurrent of sexual harassment in society.

More than half of women under 35 have experienced some form of sexual harassment, a survey by the health ministry suggests.

In Finland’s military that proportion is a quarter, although half of all women have suffered discrimination, according to research from the Finnish Conscripts’ Union.

However, both those polls were conducted before the campaign against harassment went global, and in Finland it has had a visible effect.

“I was a bit nervous before joining the army, because I had read a lot online about attitudes towards women in the forces,” says Alexiana Gaudiat. “My thoughts radically changed when I came here. I have not experienced any discrimination at all.”

“Sometimes we march long distances with very heavy packs on the back. [Men] always help. Of course, you shouldn’t just give up and lie down in tears in a heap of snow.”

Different ideas for women in the military

Saara Piitulainen believes that being a volunteer accentuates the divide between the sexes, and after the Conscripts’ Union revealed the rates of discrimination in the forces it called for conscription to be extended to women as well as men.

Not only would the number of women be increased, the union argued, but it would gradually force a change in how Finnish society sees its armed forces.

Another proposal entirely has come from a think tank led by Elisabeth Rehn, a former defence minister.

The idea would be for a universal community service for both men and women.

A set number of conscripts would join the armed forces, another group would do community service in different places in society, while a third group would not be involved at all. The first two groups would pay no tax for some years after service, while the third group would pay tax throughout.

Whatever the future holds for women in Finland’s military, it is clear that the defence minister has kick-started a national debate in a country that has a partnership with Nato, but like its neighbour Sweden is not a member.

Mr Niinisto believes there should be no voluntary option for military recruits, because he fears it jeopardises the number of conscripts Finland needs.

“We have to have a universal military service, so that we are able to train for war a military of 280,000 people,” he told Finnish public TV.

He is keen for Finland’s political parties to come up with policies on the future of the armed forces and their budget ahead of elections next year.

The two student NCOs from the Huovinrinne garrison do not believe military service is right for every woman.

“You need a certain toughness to cope sometimes, like when you start a 20km march on skis when you really don’t feel like doing it,” says Alexiana Gaudiat. She would rather the system did not change at all.