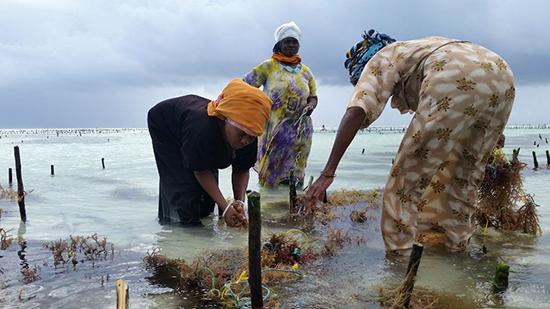 Seaweed has been hailed as a new superfood, and it’s also found in toothpaste, medicine and shampoo. In Zanzibar, it’s become big business – and as it has been farmed principally by women, it has altered the sexual balance of power.

Just after dawn, a group of women carrying ropes and sticks on their heads walk to the beach to plant seaweed at low tide.

Knee deep in the water, they drive the sticks into the sand. Small pieces of seaweed are then attached to rope strung out between the posts. In just over six weeks, these seedlings will grow tenfold and be ready to harvest. Some will be eaten but most will be dried, sold to a local broker and exported.

Raucous laughter mingles with the sound of wet skirts flapping in the breeze. The women crack jokes and exchange gossip – it’s like a watery neighbourhood allotment.

When seaweed farming was first introduced in the early 1990s, men thought it wasn’t worth their while. They preferred fishing or jobs in tourism. But some didn’t want their wives to farm either.

Mohamed Mzale, a community leader in the east coast village of Paje puts it bluntly: “I thought this seaweed business was a kind of family planning because after hours on the beach and work in the house our women were very tired – they had no time – you know… to make babies.”

Mohamed initially refused to allow his first wife to go with the others. “She was sad and crying a lot,” he says. So eventually he relented.

Seaweed farming has proved a liberating force on the overwhelmingly Muslim island. Until recently most women in the villages only left their houses to go to a funeral, a wedding or to visit a sick relative. Their isolation was even reflected in the architecture – many houses have stone benches along the outside wall to allow men to receive visitors at home without compromising the privacy of their women indoors.

“At the beginning some husbands threatened divorce if their wives went out to farm seaweed,” says marine biologist Flower Msuya. “But when they saw the money women were making, they slowly began to accept it.”

Women began visiting the market and travelling on buses to the capital rather than leaving all the shopping to their husbands. Soon many families could afford school books and uniforms, furniture, better food and roofs made of corrugated iron rather than grass.

Safia Mohamed, a seaweed farmer from the village of Bweleo on the south-west coast, has done exceptionally well for herself. She has a shop where she sells seaweed soap, jam and chutney. With the proceeds she bought her sons a fishing boat, a scooter and built a big family house.

I admire the shiny white floor tiles and fancy corniced ceilings but she is much prouder of something else.

“I have four children, I have been married since 1985 and I’m my husband’s only wife,” she says.

Safia tells me she’d have to accept a second wife, because that’s Islamic law. But quickly adds that the new woman would have to sleep somewhere else – not in her house.

Under the tranquil surface of Paje, all manner of domestic dramas are unfolding – some worthy of a soap opera plot. Along with polygamy, divorce is also commonplace.

Marital disputes are usually dealt with at one of the 10 Islamic Shariah law courts on Zanzibar and the neighbouring island of Pemba. Theoretically, either partner has the right to seek divorce, although in practice it is instigated by the husband.

Like the savvy businesswoman Safia, Mwanaisha Makame has also put her seaweed money into real estate. I assume the half-built house she shows me near the taxi rank is for her grown-up children but she says no, it’s a place where she can live in case her marriage breaks down. It is an insurance policy in a society where men are seldom forced to pay alimony.

“There’s no guarantee in marriage in Zanzibar,” she laughs. “If our husband falls for some other woman, love can make him crazy and he can just tell you to go.”

I wonder if there is much jealousy between women in the village. Mwanaisha stops smiling and gives me a hard look. “Yes. A lot!” she says.

The women here have another problem to deal with – climate change.

Most of Zanzibar archipelago’s ‘s seaweed is grown on the island of Pemba, which has rocky inlets rather than flat wide beaches and consequently been less affected by rising water temperatures. But in Paje seaweed stopped growing for three years from 2011. It gradually returned, but only the low-value spinosum variety which contains less of the substance – carrageenan – which is used as a thickening agent in foods, cosmetics and medicines.

As a result, the business is now less lucrative.

To make matters worse, for a while the warmer sea temperatures encouraged a form of blue-green algae that gave the women painful rashes and blisters. Many in Paje gave up the business – out of 450 seaweed farmers working in the town 20 years ago, only 150 are left.

Reziki, Mwanaisha’s neighbour, badly needs money with seven children but she is now selling fried samosas instead. Other women who used to farm seaweed on the beach are now making handicrafts which they can sell to sunbathing tourists. Still, the fact that they are at work outside the house is one of seaweed’s legacies.

Marine biologists say the best way to make seaweed more profitable again is to plant cottonii – a valuable variety containing more carrageenan – in deeper, cooler water. But there’s a hitch. The women need boats – and they don’t know how to swim.

I get into the sea at high tide with a group of women in the village of Mungoni wearing lifejackets and straw hats. Their long wrap around skirts make learning breast stroke very difficult if not dangerous. There is a lot of screaming and nervous laughter. One woman in a flowery dress is clinging tightly to a mangrove tree – she looks terrified. But out of the water she regains her composure. “I was happy because I was learning,” she says. “If men can swim, we can too.”