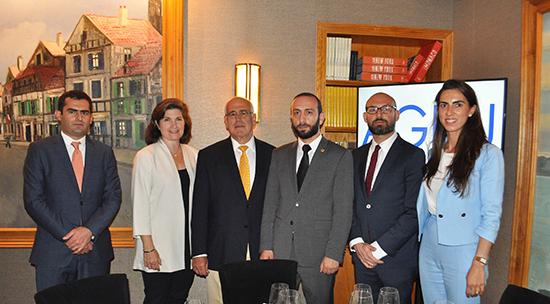 On July 15, at the invitation of AGBU, a delegation of senior officials of Armenia’s Pashinyan administration, during its first official visit to the United States, met with AGBU community members for an open dialogue in Manhattan. Speakers included three government representatives who had traveled to New York to attend the High-Level Political Forum at the United Nations on July 16 and 17 to present Armenia’s progress on the United Nation’s Sustainable Development Goals (SDG): First Deputy Prime Minister Ararat Mirzoyan; Deputy Minister of the Diaspora Babken DerGrigorian; and First Deputy Minister of Transport, Communications, and Information Technologies Hakob Arshakyan.

Given the Pashinyan government’s stated intentions to reinvigorate diaspora-homeland relations, AGBU structured the dinner as the first step in giving the diaspora a seat at the table of ideas and strategies, as the new government formulates a bold agenda for putting the country on a new track to economic and social development. Both AGBU and Armenia’s leadership agreed that creating a new model for engaging with and leveraging the Armenian diaspora is long overdue.

In setting the tone for the evening, AGBU reinforced the importance of embracing the idea of one global Armenian nation, which incorporates Armenia, the Church and the diaspora, each needing the other to complete the whole.

To encourage an open and candid dialogue, AGBU decided to follow the British-derived Chatham House Rule, which creates a safe space for speakers and participants to share ideas, ask questions and impart information with the understanding that nothing expressed is attributed to any individual or organization. Guests had the opportunity to explore issues in greater depth in round table discussions with the official representatives.

Based on participant feedback, this seemed to be a welcome and refreshing approach. As one guest remarked at the end of the evening, “This was an amazing opportunity to have an audience with a senior Armenian government official for several hours, to express my views and perspectives and probe the responses. It was a deep dive into so many areas of mutual relevance and concern.” Another guest said this exercise was “extremely important to the future of Armenia-diaspora relations. Much was learned about government services and opportunities for diaspora involvement that were previously not accentuated.”

The evening’s key theme was how Armenia-diaspora relations can be reimagined in a spirit of true collaboration and partnership versus the charity-driven paradigm of the past. The relationship should be defined as an equal partnership, characterized not only by financial engagement but also knowledge transfer and expertise sharing. Another question addressed was how diasporans can “take ownership for the country’s development as investors, technical advisors and industry specialists while also seeing themselves as global Armenian citizens whose identity takes on an added dimension through civic engagement.” As one participant put it, “Diasporans should have skin in the game.”

As the evening progressed, concrete proposals to encourage diasporans to do business in Armenia were offered with special emphasis on the tremendous potential in high tech innovation. Recommendations were summarized and provided to AGBU Armenia as input for crafting the partnership and presenting it to the appropriate decision-makers in Yerevan.

Throughout the evening, AGBU, with its global reach and long experience in nation building programs in education and socio-economic development, was recognized as essential to the new engagement between Armenia and diaspora. Among its current initiatives are a women’s empowerment program that supports women who are starting or scaling up a small business, and its BRIDGE for CSOs, which provides opportunities for mentors from the diaspora to register with the Together4Armenia online platform and match their skills with local civil society organizations looking to increase capacity. AGBU is also a partner of the Armenia National SDG Innovation Lab—a space for citizen engagement, experimentation, collaboration and analytics to help unlock Armenia’s development potential and accelerate the implementation of the 2050 sustainable development goals. Three industry sectors critical to Armenia’s economic development were identified—Tourism, Information Technologies and Agriculture.

For the Armenia delegation, the evening was conducive for open discussion as well gauging the immediate feedback to the ideas presented, allowing them to return to Yerevan with a clearer understanding of the aspirations for the next phase of co-equal nation-building in a free and open society.

After the event, Berge Setrakian, president of AGBU, expressed his satisfaction with the progress made in the three hours of meaningful conversation in the small group setting. “AGBU has time and again stressed the idea that for both Armenia to succeed as a nation and for the diaspora to flourish as a community, we must think and act as one global nation. With the hopes of Armenia’s citizens raised since the Velvet Revolution’s peaceful transition of power, the diaspora must also look toward the future with fresh eyes, open minds and a full heart for the important work that lies ahead. AGBU applauds this new climate of inclusion and is committed to playing its vital role in improving the lives of Armenia’s citizens through programs that encourage direct diasporan involvement and support.”

Established in 1906, AGBU (www.agbu.org) is the world’s largest non-profit Armenian organization. Headquartered in New York City, AGBU preserves and promotes the Armenian identity and heritage through educational, cultural and humanitarian programs, annually touching the lives of some 500,000 Armenians around the world.

For more information about AGBU and its worldwide programs, please visit www.agbu.org.